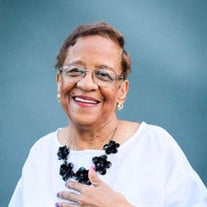 MY LIFE, MY GIFT, MY PEACE... On Saturday, September 11, 2021, Helen Valeria Smith, loving daughter, sister, wife, mother of three and the step mother of six, passed away at the age of seventy-nine (79). Helen was born on November 19, 1941 in a town called Princess Anne, Maryland to the late Martha Elizabeth Corbin Mills and James Howard Mills. Helen attended Somerset High School in Princess Anne, Maryland and once she graduated, she continued her education and became a licensed beautician. While Helen was pursuing her career choices, she also gave birth to two wonderful boys, Keith and Richard. They were the joy of her life. After the birth of Richard, Helen started working at Peninsula General Hospital in Salisbury, Maryland in 1964 as a nurse’s aide. Helen continued her path as a caregiver and decided to broaden her horizon and move to the “Big Apple.” When Helen moved to Bronx, New York and gave birth to her beautiful daughter Carol, the two joys of her life now needed to share the love of their mother with their beautiful baby sister. After several years of living in the Bronx, Helen decided to build a house back in the country, so she moved her family back to the Eastern Shore of Maryland. In 1972, Helen returned to her roots and started working again at Peninsula General Hospital, renamed Peninsula Regional Medical Center (PRMC), where she continued until 2014. Helen retired from PRMC after forty-two (42) years of service. During her many years as a unit secretary, Helen became the love of everyone’s eye whom she met. She was often spoken about as being the nicest person ever. Many days Carol would say, “Who, who are you all talking about; that’s not the woman who raised me, the way she wore my butt out.” And everyone would proceed and say, “You probably needed it”, but Ms. Helen was so nice. During the several years of praying and staying steadfast with the Lord, Helen was blessed with the love of her life, Oliver, but we all knew him as “Honey.” They married in 1985 and loved each other unconditionally until the Lord called Honey home in 2015. Helen’s love for her family was known by everyone with whom she came in contact. She spoke of how proud she was of her children, but there was no greater love than her grandchildren. This tune that she carried soon changed when the true love of her life, Isiah Mills, was born and the rest of the family took a back seat. Third-world countries knew who Isiah was and that he brought so much joy, comfort and love to her life. Helen had so many open spaces in her heart and she made sure you had a place to rest in her heart. She often spoke about the love she had for her daughter’s beloved companion, Darryl Duffy, and her daughters-in-law, Sylvia Duffy and Rhonda Mills. Darryl was the one who could make Helen smile in the midst of it all. His personality and his wittiness were charming, but she loved Darryl mostly because of the love he had for her daughter. Darryl was often referred to as “Spoonhead” followed by a slap on the forehead. This was Mom’s way of showing love. Even though Helen’s memory started declining, Darryl could walk in the room and say, “There’s my gal”, and mom’s smile would brighten up the room. Sylvia and Rhonda were like daughters to her and she would tell Sylvia, “You are my daughter, not an in-law.” Sylvia and Helen spent countless years together and shared a bond beyond compare and when Richard married Sylvia, no one could have been happier. But then, Rhonda came along towards the transition of Mom’s final life’s journey and she comforted Helen, took care of her and Helen often said, “Rhonda is so good to me.” Rhonda could walk in the room and Helen would smile, tilt her head to the side and say, “Well hello.” She was blessed to have them all. In 2017, Helen started dating Louis Duffy, Sr. and they often sat on the phone for countless hours, talking about how they were going to get married. Then he would fall out laughing and Mom would say, “Don’t let Carol hear you talking like that.” Louis kept her in good spirits until he was called home to be with the Lord in 2020. In addition to her father, James Mills and her mother, Martha Mills, Helen was preceded in death by her brothers, Howard Mills, Sr., George Mills, Sr., Robert Mills, Sr., James (Jimmy) Mills and two sisters, Mary Wilson and Katherine Bivens. Helen’s life and legacy will be cherished by: her three children, Keith Mills, Sr. (Rhonda), Richard Duffy, Sr. (Sylvia) and Carol Duffy (Darryl); six step children, Oliver Smith III, Blenda Smith, Daryl Smith, Sr., Sonia Smith, Felita Sampson (William) and Kimberly Smith. With a combination of 22 grandchildren, 42 great grandchildren, and 6 great-great grandchildren, as well as a host of nieces, nephews, cousins and friends, the life of Helen Valeria Smith will be suitably honored by generations to come and forever treasured. LOVINGLY SUBMITTED, HELEN’S FAMILY Lovingly Submitted The Family

MY LIFE, MY GIFT, MY PEACE... On Saturday, September 11, 2021, Helen Valeria Smith, loving daughter, sister, wife, mother of three and the step mother of six, passed away at the age of seventy-nine (79). Helen was born on November 19, 1941... View Obituary & Service Information

The family of Helen Valeria Smith created this Life Tributes page to make it easy to share your memories.

Send flowers to the Smith family.