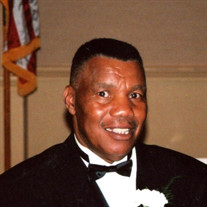 Harry William Brinkley, was born in Camden, Delaware, on June 26, 1941, to the late Allen Layton, Sr. and Mildred Hoxter Brinkley. He was the sixth child of the Brinkley siblings. On Wednesday morning October 27, 2021, he departed this life at Penn Medical Center in Philadelphia, Pennsylvania, surrounded by his loving family, listening to Take Me To The King. To his family and friends, he was affectionately known as “Fish” or “Peels”. Harry received his education at Booker T. Washington Elementary School and William Henry Comprehensive High School in Dover, Delaware. In high school he excelled in football, track and baseball. Harry started working as a young teenager for the Holt family and continued to work for them as an adult. When they started Holt's Distribution Company, he became the Warehouse Inventory Control Manager. The company was sold to State Janitorial Supply and he continued to work there until retirement. He also worked at Lewes Dairy Market, Holy Cross School, Super Soda and his final employer was The Modern Maturity Center which he retired due to a health condition. Harry joined the Military Branch of the Army in 1968 and served two years. He fought in the Vietnam War with the "Big Red 1 Unit". He was a proud Vet and wore his Vietnam logo hat daily to prove it. He was a member of the American Legion. Harry was united in holy matrimony to Miss Calmetta Woolford on May 7, 1982. In 1987, they became the proud parents of two sons and a daughter and now their family was complete. Harry accepted Jesus Christ as his personal Savior and joined Mt Zion AME Church in Dover, Delaware in the late eighties under the leadership of the Late Reverend Rudolph Coleman. He was a Trustee, Van Driver, Church Custodian and a member of the Lay Organization. On June 6, 1992, and October 5, 1997, Harry was honored by the Lay Organization for outstanding service and dedication. Harry had the gift of help; helping those stranded on the side of the road and delivering food to the hungry. He carried coats in the trunk of his car to give away or he would give the coat off his back. He loved helping with the church and community events. Harry also loved helping his wife care for her family. He enjoyed listening to all types of music. He was an avid sports fan the Philadelphia Eagles was his favorite team. In addition to his parents, Harry was preceded in death by, brothers, Allen, Ralph, James and Tyrone Brinkley; sisters, Mary Waters, Mildred Helena Hopkins and Emogene Smith. Harry leaves to cherish his memories, a loving and devoted wife, Calmetta Brinkley; his children, Tony Brinkley (Danielle) of Magnolia DE, Dwayne Brinkley and Desiree Brinkley both of Dover, DE; nine grandchildren, Austyn and Aubrianna Brinkley, Deja Davis, Jaden Harris, Samora Brinkley, Tykwan James, DeAynah Davis, Malachi Brinkley and Avery Brinkley; one great-grandson, Jacari Lee; one sister, Angela Turner (Carlton Sr.); father in-law, Louis W. Woolford; three brothers in-law, Louis D. Woolford (Sylvia), William Woolford and Alexander Woolford; special nephew, Ernest J. Brinkley; his bonus families, the Woolfords, the Browns, the Colemans, Pearl & Butch Guy and Schenida Green-James; Modern Maturity Center Friends; and a host of nephews, nieces, cousins and friends.

Harry William Brinkley, was born in Camden, Delaware, on June 26, 1941, to the late Allen Layton, Sr. and Mildred Hoxter Brinkley. He was the sixth child of the Brinkley siblings. On Wednesday morning October 27, 2021, he departed this life... View Obituary & Service Information

The family of Harry Brinkley created this Life Tributes page to make it easy to share your memories.

Harry William Brinkley, was born in Camden, Delaware, on June...

Send flowers to the Brinkley family.