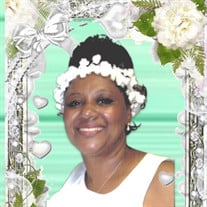 LIFE REFLECTIONS OF GLORIA JEAN JONES-WRGHT Gloria Jean Jones-Wright, daughter of the late James Jones and Mary Handy, entered this life on April 15, 1954 in Pocomoke, Maryland. She departed this life on Tuesday, September 28, 2021 as her devoted husband Lenny held her hand as the angels escorted Gloria to her final resting place. In her early years, Gloria was moved to Philadelphia, Pennsylvania to live with her father and his wife Yvonne. She was blessed to have two families that loved her very much. All of her educational studies were provided by the Philadelphia school system. She attended University City High School where she participated on the Track Team and Pep Squad. Gloria accepted Christ and was baptized in her teens. Her Christian foundation was taught at Greater Works Ministries, under the pastoral leadership of Dr. Ruth M. Jackson. As an adult, she joined the membership of Faith Temple of Deliverance under the leadership of Apostle Joel Charleston who also affirmed Gloria as an Ordained Minister of the Gospel. She and her husband actively attended until they relocated to Salisbury, Maryland. After establishing residence in Salisbury, they became faithful members of Mount Olive Baptist Church in Dublin, Maryland. Gloria met the love of her life Leonard Wright and they were joined in Holy Matrimony on August 23, 2002. This union of nineteen (19) years lovingly held true to the vow they made to each other of, “ln sickness and in health until death do we part.” Affectionately known as “Taffy”, growing up she was very inquisitive and always eager to learn. She was a very sociable person who made friends easily. Taffy had such a zest for life, vibrant, outgoing, adventurous, loved to travel, loved to explore different restaurants, she lived well. She was a fashionable dresser who always aspired to be her best self. Among her favorite things to do was cooking – whenever she and Lenny invited you to a “cook-out” you were guaranteed a smorgasbord of finger licking good food. Her other favorite pastime was shopping. Those who knew Gloria can attest to the fact that she was a “shop-a-holic QVC ordering Queen” but most of the items were to give to others. She had a very generous heart. She had a strong work ethic early in life and took on many tasks after school and weekends. Beginning with babysitting for family friends, her ambitious nature led her to various occupations. Just to name a few, they included Mancurist, Nurses Assistant, and she was trained to become an Amtrak Conductor. Finally Gloria was hired at SCI Graterford to the position of a Correctional Officer where she remained for ten (10) years and retired due to health challenges. Gloria was preceded in death by her parents, James Jones and Mary Handy, sisters, Anntionette Richardson and Barbara Boyce and stepmother, Yvonne Jones. To cherish her memory, she leaves: her devoted husband, Leonard Wright; children, Marc Jones, Danielle Wright, Erica Wright, William Wright, Loukeya Wright and Leonard Wright IV; brothers, Rev. Alonzo Schoolfield (Peggy), Lawrence Handy (Olevia), Charles Handy (Betty), Calvin Handy, Anthony Handy, Barry Handy (Tanya), James Jones, Jr., (Maria) and Derrick Allen; sisters, Norma Williams, Peggy Shivers, Patty Handy, Kimberly Jones and Kellie Jones; 17 Grandchildren; 2 Great-Grandchildren; 11 Nephews; 13 Nieces; special friends, Marsha Romero and Zock Steel and numerous other relatives and friends.

LIFE REFLECTIONS OF GLORIA JEAN JONES-WRGHT Gloria Jean Jones-Wright, daughter of the late James Jones and Mary Handy, entered this life on April 15, 1954 in Pocomoke, Maryland. She departed this life on Tuesday, September 28, 2021 as her devoted... View Obituary & Service Information

The family of Gloria Jean Wright created this Life Tributes page to make it easy to share your memories.

Send flowers to the Wright family.