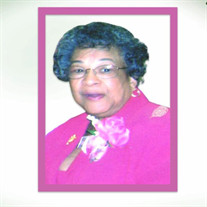 Celebration of Life for Gloria Marie Henry “Loss brought us here today, but her legacy of love for family and church will keep us as we move forward from today.” Gloria Marie Henry kept the faith, finished the race, and went home to be with the Lord on March 29, 2022. She was born in Dorchester County, Maryland on November 29, 1938 to the late Reverend George L. and Mamie Stanley. She attended Dorchester County schools and later earned a GED and Associate degree from Chesapeake College before matriculating at the University of Maryland Eastern Shore in Princess Anne, Maryland. There she earned a Bachelor of Science degree in Sociology. While earning her GED and Associate degree, Gloria was employed by Harper and Bateman. She later became a Cooperative Extension agent for the University of Maryland Systems. Her final twenty-four years of employment were at the Dorchester County Public Library, from which she retired in 2003. Gloria was a faithful member of Hurlock United Methodist Church (Washington). She dedicated her life passionately to her church and community. During this time, she received recognition and awards for exemplary performance that includes distinguished service at The Dorchester County Public Library, a Faithful Worker Award – President of Trustees (Hurlock United Methodist Church), State of Maryland Certificate of Service Award issued by then Governor Harry Hughes, and HUMC Certificate of Appreciation for devoted and invaluable service to others. She was a certified Lay speaker, served as Church Lay Leader and was a member of the Prayer Team Ministry. Gloria was a member of the Staff/Pastor-Parish Committee, served as Membership Chairperson, was on the Hospitality and Culinary Ministries, and established a card ministry that acknowledged graduations, birthdays, weddings, and other significant events in the lives of church and community members. Hallmark loved to see her coming. In addition, she was a former member of the Finance Committee and had a prominent leadership role in the 3-church merger that became Hurlock United Methodist Church. Gloria was also on the board of Delmarva Community Center, served an election poll worker, and was a notary public. Gloria Marie Henry was preceded in death by her parents, brother, George Stanley, Jr., a grandson, Rodney Eric Todd, Sr. and seven great-grandchildren in an unfortunate accident and a daughter-in-law, Kim. Gloria is survived by: her devoted husband, William Henry; sons, Gordon Stanley (Cindy), James Stanley (Patricia), Rodney Stanley (Pattie) and Richard Stanley; daughters, Denise Aldridge (Larry) and Marsha Williams (John); two stepsons, Kirk Henry and Zhon Henry (Celestine); thirteen (13) grandchildren; eleven (11) great-grandchildren; three sisters, Evelyn Sampson, Thelma Sterrett, and Geraldine Pauls (William) and a host of nieces, nephews, cousins and friends. In addition, she is survived by brothers-in-law, David Henry, Dwight Henry (Meredith) and Eric Henry (Nadine), and sisters-in-law, Pam Henry (Jill) and Marla Baines (Harold). SUBMITTED WITH LOVE ~ THE FAMILY

Celebration of Life for Gloria Marie Henry &#8220;Loss brought us here today, but her legacy of love for family and church will keep us as we move forward from today.&#8221; Gloria Marie Henry kept the faith, finished the race, and went home... View Obituary & Service Information

The family of Gloria Marie Henry created this Life Tributes page to make it easy to share your memories.

Send flowers to the Henry family.