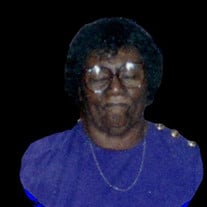 Deaconess Gertie Wee Thomas, daughter of the late Allen and Sarah Williams, was born on Thursday, April 16, 1931, in Elizabeth City, North Carolina.  She departed this life on Friday, September 10, 2021.  She completed her formal education in Elizabeth City, North Carolina.  In her early 20’s, Gertie would move to Lincoln, Delaware, and later settle in Millsboro, Delaware.  Throughout the years, she worked in various production jobs such as King Cole and finally retiring at Vlasic Foods.  She volunteered with Helping Hand Club in Millsboro.  She will be remembered for her love of RC and Orange sodas, Mr. Goodbar candy and chocolate cake.  She was best known for hand rolled dumplings and throwing down in the kitchen.  She never missed watching her daytime stories and then, setting her TV on TBN.  In addition, she will be remembered as a devoted wife, mother, sister, grandmother, aunt, cousin and friend. On November 10, 1952, Gertie married her sweetheart, James Thomas.  They were married for 50 years.  This union produced six children. At St. John 2nd Baptist Church, she sang in the Senior Choir and was a member for nearly 60 years  Gertie was predeceased by her husband, Deacon James Edward; eldest son, James H. Thomas; three sisters, Hazel, Lillian and Nellie Mullen; and two brothers, George Lee Williams and John T. Williams. Gertie leaves to cherish her memory, six children; Laura Morris (Lloyd) of Lewes, DE, William Allen Thomas of Milford, DE, Marilyn Thomas (George) of Millsboro, DE, Calvin Thomas of Newark, NJ and Emanuel Thomas of Millsboro, DE; daughter-in-law, Emmer Thomas of the late James H. Thomas; eight grandchildren; two great-grandchildren; and a host of nieces, nephews, relatives and a very loving Church family at St. John 2nd Baptist Church.   We won't say that she will be sadly missed because we have too many happy and precious memories of her. On Friday, September 10,  we believe she went to be at rest with her sweetheart, James and in the bosom of Abraham.  So we echo her favorite songs: Your Grace and Mercy and Rough Side of The Mountain.

The family of Gertie Thomas created this Life Tributes page to make it easy to share your memories.

Send flowers to the Thomas family.