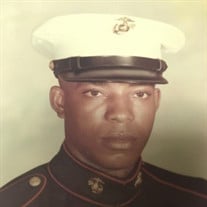 FULTON’S JOURNEY... Fulton James Williams, Jr. (Buddy), was born in Salisbury, Maryland on December 16, 1949, the first of three children born to the late Lena Mae Wilson and Fulton J. Williams, Sr. He departed this earthly life for his heavenly reward on Sunday, September 12, 2021 at Tidal Health Peninsula Regional Hospital in Salisbury, Maryland. Fulton received his formal education in the Wicomico County school system and graduated in 1967 from Wicomico Senior High School. He enlisted into the United States Marine Corp on September 09, 1970. While serving in the military, Fulton received a National Defense Service Medal and a Good Conduct Medal. He completed an Aviation Fundamentals Course. He received a honorable discharge on June 30, 1972. Fulton later moved to Delaware and worked for Amtrak in multiple positions until he retired as a Manager and Litigation Officer. He worked for the State of Delaware in multiple positions, from May 1, 1999 until he retired on August 1, 2012, including the Management branch of Environmental Control. He received a nomination for “Outstanding Technical Professionals: Scientific, for his excellent work ethic, going above and beyond enforcement of state regulations, and the calm and patient manner he displayed when working with the regulated community. He was acknowledged for the genuine respect and affection he earned from his consistency and fairness to every contractor, staff members, and the public. He was an active member of the Diversity Action Committee which promoted discussion between the department and the Native American Community. Fulton was involved in the “Habitat for Humanity” ad Community Cleanup Days, earning him the title of the departments, “Iron Man.” Briefly, Fulton was involved with the Wilmington, Delaware Jaycees. He helped with the annual Christmas day parade and received a “Fired-Up Award” for his involvement. Fulton was a loyal fan of the Dallas Cowboys NFL team, which was made evident by all the memorabilia he displayed at home. He enjoyed all sports including basketball, football, car racing, and boxing. He loved watching antique car auctions and cooking shows. Most of all, he loved God and spent his last days reflecting on his life and relationship with Jesus, his family and friends. After every phone call he would end the conversation with, “I love you” with everyone.   Fulton leaves to cherish precious memories: his wife, Reverend Marceline Brooks-Williams; one son, Barry Williams of Willards, MD; two step-daughters, Erika Zaimah of Salisbury, MD and Sharie Porter of San Antonio, TX;  two sisters, Selina Dashiell-Parker (Glenn) of Decatur, GA and Helene Powell of Winter Haven, FL; one step-sister, Dorothy Stewart of Houston, TX; two grandchildren, Zoey and Zachary Williams, both of Beavertown, PA; three step-grandchildren, Marceline Brooks of Essex MD, Monyet Brooks of Las Vegas, NV and DeAndre Thomas of Tulsa, OK; god daughters, Bianca Henson of VA, Shannon Lawal of FL, Avon Bragg of MD and Dr. Jennifer Dashiell-Shoffner (Charles); two aunts, Geraldine Polk and the Reverend Gloria Taylor-Lewis; three nephews, Martis Powell of Greenwood, DE, Matthew Dashiell, Jr. and Christian Parker, both of Atlanta GA; nieces, Chandra P. Bond (Will) of Phoenix, AZ, Amanda Conway of Salisbury, MD, Clementine Conway of Newark, DE and Brenda Jernigan of Salisbury, MD and many more cousins and a host of other family members and friends.   Besides his parents, Lena Mae Wilson and Fulton J. Williams, Sr., Fulton was preceded in death by his sister, Marva Williams Purnell Greene, his grandparents, William Thomas Wilson and Evelyn Wilson, Walter Price, Bessie Johnson Williams and John Henry Williams and niece, Niki Nicole Powell. LOVINGLY SUBMITTED ~ THE FAMILY

The family of Fulton James Williams Jr. created this Life Tributes page to make it easy to share your memories.

Send flowers to the Williams family.