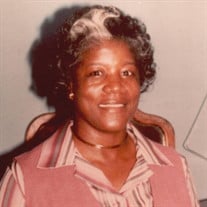 Freda Elizabeth Fenwick, was born October 24, 1933, to Helen Brown & Thomas Randolph Fenwick of Church Hill, Maryland. Freda “Went Up Yonder” at the tender age of 88, on January 31, 2022, at The Resorts at Chester River Manor in Chestertown, Maryland. Freda was educated in the Maryland School District and advanced to Kennard High School. She did not graduate, due to being the caretaker for her siblings, Archie, Thomas, Cora, Roland, Raymond, Joshua, Gary, John, Elwood, Roy, Bernice, Martha, and Karen her only living sibling; after the passing of her mother. She was a longstanding member of Bethel A.M.E. Church, in Church Hill, Maryland. Her favorite song was Going Up Yonder. Freda lived a simple life on Buzzards Lane, now New Street, taking care of her family, which also included the love of her life George “Jabo” Robinson and her children, Ronald, Michael, Cynthia, and grandson Gene, whom she raised. For most of her life Freda was a domestic housekeeper, mainly for Lillian Huck and her daughter, Julie. She was also employed at Camp Pecometh, where she received an award for being a “Chocoholic”. She would later work many years for Queen Anne’s County School District as a Cafeteria Aide, and when time came, she retired. In her past time, Freda could be seen watching her favorite soaps, The Young & the Restless and The Bold and the Beautiful. Freda watched The Game Show Network when she was not doing crossword puzzles. Long ago she would enjoy an occasional Pap’s Blue-Ribbon beer. Her more recent favorites were Royal Farms Chicken & Coffee and Ginger Ale Soda. The activities that brought her tremendous joy was spoiling and spending time with her great-grandchildren, Vincent and Isiah Dodd. For the past nine years, Freda resided and was cared for by her grandson Gene, his wife, Alicia and sons, Vincent & Isiah. Freda was preceded in death by her parents, George Robinson, siblings, sons Ronald Deaton, Michael Robinson and William D. Watson, Sr., grandson Larry O. Watson. Remaining to cherish Freda’s memory are, sister, Karen Boyer; daughter, Cynthia T. Watson; grandchildren, Gene Dodd (Alicia), William Watson, Jr. (Barbara), Valerie Watson (Stewart Wilson), Arlene Watson, Rosha Watson and Rachel Watson (Carroll Land); great-grandsons, Vincent & Isiah Dodd; Godson, Trevon Wheeler; long time best friend, Jean Cooper; and a host of other great-grandchildren, great-great grandchildren, nieces, nephews, cousins and friends.

The family of Freda E. Fenwick created this Life Tributes page to make it easy to share your memories.

Send flowers to the Fenwick family.