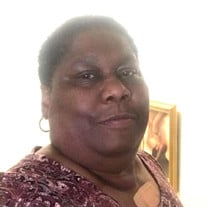 Felicia Camilla Caulk better known as “ Leesh / Licia”, the child of the late William and Ermyn Black, was born on October 16, 1966 in Chestertown, Maryland. Felicia returned to her heavenly home on Sunday April 24, 2022 at her residence. Felicia was preceded in death by her grandparents Margaret (Maggie) and Jeffery Freeman, Elizabeth and Leon Black and In-laws Sarah and John Caulk. Also a host of aunts, uncles, cousins, and in-laws. During her youth Felicia joined Mt. Olive A.M.E. Church, Butlertown, Maryland under the leadership of Presiding Elder Cordell E. Hunter. Felicia was a devoted and supportive member. Felicia sang with the Celestial Choir and worked in the kitchen when needed. Chaperoned many youth activities and served as a member with the Parents Auxiliary. Felicia graduated from Job Corp in Fairfax VA, where she earned her G.E.D and other certificates. Felicia was joined in Holy Matrimony to Steven LaPaul Caulk on September 09, 2009. Her passion was always to lend a helping hand. Felicia loved the Home Healthcare field, working with all different types of families ensuring their sick loved ones were well taken care of. For many years this was her calling until her own health failed making it too physically demanding to do. Though she faced her own issues with health, she still wanted to work with and help others so she began to work within the Kent County Public Schools doing what she loved, Helping others. Felicia started her journey being a bus aide, she absolutely enjoyed the children she met. When there was a position available within the schools, Felicia sprang into action, accepting the position excited to see her young family members within the High School and Elementary school working in the cafeterias as an aide. She did this job graciously throughout the years, until she couldn’t. Felicia was loved by family and friends, and held in high regards to anyone who came in contact with her. She was always concerned about the welfare of others and would do whatever she could to help anyone, even if it was just with a smile. Felicia was a devoted wife for 12 years, having been tied to the hip for 22 years, to her loving and devoted husband Steven LaPaul Caulk. She was the loving mother of two daughters Brittany Phillips and Tanay Moody, step mother to DaShira Caulk and Steven Caulk Jr (Chestertown, MD), an adopted son Rakeem Hicks of Delaware, adopted daughters Kristin Lindsey (Chestertown) and Felicia Wright (Trappe) and God-daughter Jayla Ward (Delaware) and God-son Davon Wallace (Chestertown). Felicia was mom mom to Kegen Howard the love of her life and Ja’Mere Wright. Adopted grandsons Jayce Black and Jakai Cooper. She leaves to cherish her memory sisters-in-law Carol Camper (Jerome) of Delaware, Lay Minister Jennifer Christy (Alan), of Chestertown, Maryland, Rev. Mary Walker of Butlertown and Pat Brown of Easton. brothers-in-law Brazil Waters (DC), Harry Caulk (Virginia). She also leaves to cherish her memory Five loving aunts, Jean Butler (PA), Patrica Black-Green (PA), Joyce Somerville (Chestertown), Lauretta Freeman, Butlertown, MD, and Carolyn Goldsboro (Chestertown). A God-sister Terrell Christy (Delaware) and God-brother Byron Freeman “Cornell” (Chestertown). Special cousins/brothers Christopher Cooper and Roderick Freeman, three special friends Rosinda Menter, Rebecca Floyd and Rhonda a host of nieces, nephews, cousins and friends and a loving and supportive family. Lovingly Submitted the Family

Felicia Camilla Caulk better known as &#8220; Leesh / Licia&#8221;, the child of the late William and Ermyn Black, was born on October 16, 1966 in Chestertown, Maryland. Felicia returned to her heavenly home on Sunday April 24, 2022 at her residence.... View Obituary & Service Information

The family of Felicia Camilla Caulk created this Life Tributes page to make it easy to share your memories.

Send flowers to the Caulk family.