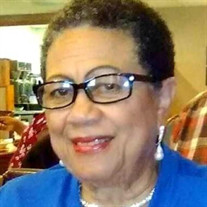 Evangelist Rosalie Day completed her work on earth and went home to her eternal rest on January 10, 2022. Rosalie Denny Day was born February 7, 1935, to the late Vincent Henry Denny and the late Dorothy Louise Denny. She grew up in Shadyside, MD and was the eldest of her siblings. She married the late Earl Moss Gross, Jr. They settled in Baltimore with their two daughters. Rosalie was intent on furthering her education. After receiving her diploma from Douglas High School, she completed two years at Coppin State Teacher’s College (now CSU) and continued her education at Bowie State College (now BSU). Rosalie also landed a job as BSU’s first Purchasing Agent and remained employed at BSU for several years. Rosalie was a loving and caring mother, who despite her busy schedule, managed to find quality time to spend with her daughters. She also believed in family and was thrilled when two of her sisters joined her as employees of BSU. Life circumstances changed that caused her to move to P.G. county with her daughters. While attending a revival church service with friend Shirley Caldwell, Rosalie accepted Jesus as her Lord and Savior. She was filled with the peace she had been seeking for a long time and began a joyous life in the Lord. She delighted in the Lord and shared the gospel with anyone willing to listen. After a few years, Rosalie met her soulmate, John Sidney Day, Sr. whom she affectionately called “Jay”. John and Rosalie moved to Seaford, DE after Jay retired from the U.S. Dept. of Commerce, however, both continued to work for several more years. Rosalie worked at JAL Associates, American General Finance, and the part-time job the couple performed together to transport special needs children to and from school. Both had fully retired by 2008 and enjoyed entertaining and traveling with friends. Jay and “Rose” as he called her, spent 34 happy years together until Jay was laid to rest in October of 2011. After that time, Rosalie spent most of her time doing the work of the Lord and sharing most holiday weekends with her daughters, sons-in-law, grandchildren and great-grandchildren. To her great-grandchildren, she was affectionately known as GG (for Great-Grandma). She delighted in talking on the phone and if she called you to chat, you could expect at least an hour or two of conversation. She also looked forward to visits from and traveling with her lifetime friends. Rosalie was a faithful member of the following churches over the years; Metropolitan Methodist Church, Baltimore, MD, Franklin United Methodist Church, Churchton, MD; Mt. Calvary AME Church, Seaford, DE and Ross Point Freedom Church, Seaford, DE. She felt a special calling by God to evangelize his word. After obtaining her Evangelist certification, Evangelist Rosalie Day brought forth the message every 5th Sunday at Ross Point Freedom Church. She remained a faithful member until her earthly departure. Evangelist Day especially loved to testify of the goodness of God. She wanted all to know that when her time came to depart this world, she would say, “It is well with my soul”. She was preceded in death by her parents Vincent and Dorothy Denny, husband John Sidney Day, Sr. daughter Jean Farinda Holland, stepdaughter Sarah Ganges passed away shortly thereafter, sisters Francine Barksdale, Ethel Riggs, Bertina Bond, brothers Thomas and Charles Jones, sister-in-law Lula Mae Denny and brother-in-law, Craig Barksdale. Rosalie leaves to cherish her precious memories, daughters Ladene Belt (Kevin) and Cheri Thomas (Charles), stepsons John Day Jr. (Pam) and Wayne Day (Carol), stepdaughters Gwen Pearson (Larry) and Deborah Washington (James), extended family of 27 grandchildren, 60 great-grandchildren, brothers Reginald Denny (Hattie), Beverly Denny, sisters Dorothy Lamour Anderson, Linda Wilkerson, Vandra Jackson (Clarence), Roxie Wooden, sister-in-law Lutha Mae Jones, lifetime friends Betty King, Pastor Shirley Caldwell, Evangelist Joan Williams, and a host of nieces, nephews, cousins and friends. She will be sorely missed.

Evangelist Rosalie Day completed her work on earth and went home to her eternal rest on January 10, 2022. Rosalie Denny Day was born February 7, 1935, to the late Vincent Henry Denny and the late Dorothy Louise Denny. She grew up in Shadyside,... View Obituary & Service Information

The family of Evangelist Rosalie Day created this Life Tributes page to make it easy to share your memories.

Send flowers to the Day family.