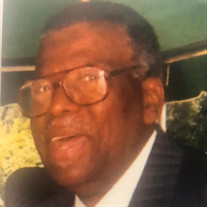 Eugene Bernard Puckham, age 85, peacefully submitted to the Will of Almighty God, on Thursday, October 21, 2021, in the comfort of his home and in the presence of his daughter, Tamar.  Genie or Gene, as his family affectionately called him, is the last of the four “Pookum Boys” from Laurel.  He was the third son born on August 7, 1936, to the late Robert and Anna Waller Puckham.    Gene attended Paul Laurence Dunbar School in Laurel, Delaware, from grades K-9, and then William C. Jason Comprehensive High School, where he graduated with the Class of 1954.  After graduating, he attended Delaware State College for three years and played baseball for two of those years.  Gene later enlisted in the United States Army and served one tour of duty in France as a Transportation Supply Specialist.  He also played baseball while in the service.  He was honorably discharged in 1960. When he returned to the States, his dream was to try out for the “Philadelphia Phillies.”  He confessed that he missed tryouts because his girlfriend Hattie didn’t want him to go.           On April 26, 1963, Eugene was joined in holy matrimony to Hattie Cooper. To this union four children were born: Victor Arnell, Tamar Vernell “Tammy”, Forrest Bertell and Anna Louise “Amy”.    Gene was employed at the DuPont Plant in Seaford, Delaware from 1960 to 1963.  He was employed at Kraft (General Foods) in Dover, Delaware for 30 years.  He also worked part-time in the evening at Safeway in Laurel.  Gene retired from General Foods in 1995 and worked another 15 years as a caregiver for his wife as she battled “Lou Gehrig’s Disease.”    Eugene was a lifetime member of New Zion United Methodist Church, where he dedicated his life to Christ in 1996.  He was always a faithful member.  When he could no longer physically attend, he still worshiped God through his weekly tithes and offerings, generous donations for special days, through daily prayer and devotions with his family.      Gene was always a competitive person, having grown up with three other brothers, he had to be.  Not only did he play the traditional sports – football, basketball, and baseball, he was very competitive in non-traditional sports as well.  He loved to shoot pool, pitch horseshoes, bowl, play cards and ping-pong.  One of his favorite card games was Pinochle. He bowled for years in a General Foods League.      In later years, Gene’s absolute favorite pastime was his family, especially playing “Pitty-Pat” and UNO with his granddaughters, bidding on the Price is Right’s showcases with Amy, eating Italian subs and watching the “stories” with Tammy, watching the MLB channel and CNN.     Gene was preceded in death by his parents, Robert and Anna Puckham; wife, Hattie; brothers, Robert, Gardner and Wayne; sisters-in-law, Carmetta Holden, Bertha Hitchens and Shirley Puckham; brothers-in-law, Richard Cooper, Jr., Donald Holden, Robert Hitchens and Chester Twine.   Gene leaves precious memories with two daughters, Amy Handy (Tyrone) of Laurel, DE and Tammy Williams (John) of Millsboro, DE; two sons, Victor Puckham (Iris) and Forrest Puckham (Verdine) both of Laurel; 15 grandchildren; 25 great-grandchildren; 1 great-great-grandchild; sisters-in-law, Armelia Puckham of Wilmington, DE, Lorraine Hitchens (Donald) of Laurel, DE and Gwendolyn Twine of Norfolk, VA; first cousins, Betty Boyd (Rodney) of Cambridge, MA, Judy Manns of Bear, DE and Beverly Richardson of Texas. Gene will also be missed by a host of nieces, nephews, cousins and friends.

Eugene Bernard Puckham, age 85, peacefully submitted to the Will of Almighty God, on Thursday, October 21, 2021, in the comfort of his home and in the presence of his daughter, Tamar.  Genie or Gene, as his family affectionately called him,... View Obituary & Service Information

The family of Eugene Puckham created this Life Tributes page to make it easy to share your memories.

Eugene Bernard Puckham, age 85, peacefully submitted to the Will...

Send flowers to the Puckham family.