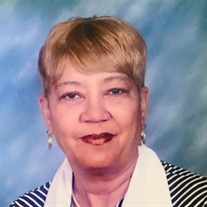 Esther E. Brown, peacefully transitioned from this life, on February 23, 2022. She achieved a full life shared with a multitude of family and friends! She was born on October 23, 1943 to Orietta &#8220;Etta&#8221; Durham Thorpe and James Nolan... View Obituary & Service Information

The family of Esther E. Brown created this Life Tributes page to make it easy to share your memories.

Esther E. Brown, peacefully transitioned from this life, on February...

Send flowers to the Brown family.