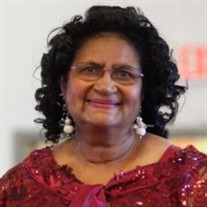 Ernestine McGlone, 82, of Dover, Delaware, passed away on February 19, 2022, lovingly surrounded by family. Ernestine was born on January 6, 1940, to Sadie Hextole and Lloyd Swain, in Edenton, North Carolina. She was one of 12 children. On January 15, 1955, she wed Joseph McGlone and the two were inseparable from that point on. Ernestine and Joseph were married for 67 years and had three children, daughter, Diane McGlone and two sons, Steve McGlone and Anthony McGlone. A fiercely dedicated wife and mother, Ernestine worked at Barlyn for 22 years as a supervisor seamstress in Newark, New Jersey and a receptionist at North Jersey Blood Bank for six years. Ernestine was a passionate seamstress and cook. Her famous dishes including pies and cakes, would fill her home and any home with warmth and kindness. Ernestine, on any given day, could be found in her favorite store, JoAnn Fabrics. Having created hundreds of bridal gowns for brides all over the country, she was passionate about making lifetime memories. In addition to being an incredible cook and seamstress she also sang Soprano in the gospel group, Joseph McGlone and the McGlone Singers. March 19, 2016, Ernestine became an Elder at Seeds of Greatness Bible Church. Throughout her entire life, she held an unwavering faith in God, which she shared with those who surrounded her. Ernestine, truly was a Proverbs 31 woman. Ernestine was preceded in death by five sisters; six brothers; daughter, Diane McGlone; and grandson, Steven McGlone, Jr. Ernestine leaves to cherish her husband of 67 years, Joseph McGlone; children, Steve McGlone and Anthony McGlone; daughter-in-law, Linda Jean McGlone; six grandchildren, James McGlone, Cordell Suggs, Gia Ware, Cherrelle Price, Aaliyah McGlone and Ayanna Ford; 12 great-grandchildren; two great-great grandchildren; four sisters-in-law, Ernestine McClam, Carolyn Phillips, Mary Swain and Joyce Outlaw; brother-in-law, Clarence McClam; and a host of nieces and nephews, family and friends.

Ernestine McGlone, 82, of Dover, Delaware, passed away on February 19, 2022, lovingly surrounded by family. Ernestine was born on January 6, 1940, to Sadie Hextole and Lloyd Swain, in Edenton, North Carolina. She was one of 12 children. On... View Obituary & Service Information

The family of Ernestine McGlone created this Life Tributes page to make it easy to share your memories.

Ernestine McGlone, 82, of Dover, Delaware, passed away on February...

Send flowers to the McGlone family.