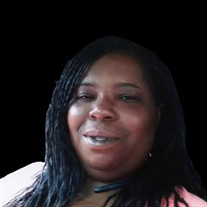 Erica’s Journey... Erica Michelle Butler (42), a resident of Salisbury, Maryland, transitioned from earth to glory at the age of forty-two (42) on Friday, December 17, 2021. Erica was born on July 20, 1979 in Newport News, Virginia and was the daughter of James and Patricia Butler. After receiving her education in the public schools of Wicomico County, Maryland, she later received her GED through Wor-Wic Community College in Salisbury, Maryland. Erica was a woman of many talents. She loved doing hair, cooking and spending time with her friends and family. Erica loved to make people laugh and she had a smile like no other. Under the direction of Elder Ollie M. Carter, Erica attended church at St. John’s House of Deliverance in Fruitland, Maryland. In addition to her parents, James and Patricia Butler, Erica leaves to cherish precious memories: four children, Nykeria Reaves, James Justice, Jr. and Jada Justice, all of Salisbury, Maryland and Trenya Schoolfield of Pocomoke, Maryland; one granddaughter, Sa’Myriah Reaves of Salisbury, Maryland; three sisters, Tanisha Carter and Sharonda Handy, both of Salisbury, Maryland and Kimberly Mallette of Baltimore, Maryland; five brothers, Patrae Butler, Ryan Handy and Aaron Handy, all of Salisbury, Maryland, Kevin Butler of Denton, Texas and James Mallette of Baltimore, Maryland and a host of aunts, uncles, nieces, nephews, family and friends. Erica was preceded in death by her son, Jadan Justice, her brother, James Butler, Jr., her sister, Kimberly Butler, her grandparents, Johnnie and Elder Ollie Mae Carter and Joe and Kate Walker. Lovingly Submitted, The Family

The family of Erica Michelle Butler created this Life Tributes page to make it easy to share your memories.

Send flowers to the Butler family.