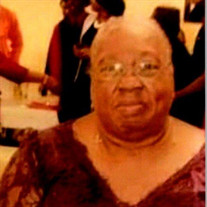 Emma’s Life and Legacy On January 19, 2022, at Tidal Health Hospital in Salisbury, Maryland, Emma Carrie Harmon Chisum departed this life peacefully. She was born to the late Otho and Sarah Harmon on February 25, 1939. “Sister”, as everyone called her, was raised in Painter, Virginia and received her education in the Accomack County public school system. Growing up as a child, she worked in the fields, picking tomatoes, cucumbers, and as she would say, “getting up potatoes.” Before going to school, Emma, along with her other brothers and sisters, had to pick strawberries. As a young single adult mother, “Sister” birthed three children, Teresa, Jimmy and Lindwood Harmon. However, on October 15, 1960, Sister married Albert Milton “Pee Wee” Chisum. Together they shared five children, Josephine, Albert, Nancy and “twins”, Rosa and Debbie Chisum. Sister worked shucking oysters for several years until she was employed at Holly Farms for twenty (20) years, which became known as Tyson Foods by the time she retired. She was a hard, strong and working woman and even after she retired, she kept working to provide for her family. She then went to work at American Original Food Clam House for several years until she could no longer work. Sister’s smile would light up the room and she could make anyone laugh. Her heart was loving towards everyone with whom she had contact. If you were having a bad day, come see Sister, Momma, Grandma, Mom-Mom, Grandma Emma or Aunt Sister and she would make us laugh. She went above and beyond for her children, grandchildren, nieces and nephews. Along with her love for her family, Sister loved the Lord. She would say, “I can’t get out and go to church like I used to, but I have the Lord in my heart.” In the late 60’s and early 70’s, she became a member at Mount Calvary Baptist Church in Exmore, Virginia for many years under the leadership of the former Pastor, Reverend Handy and the present Pastor, Reverend Jeffery Smith. She relocated to Pocomoke City, Maryland, along with her husband and grandson in 1994. She later became a member of Miracle Deliverance Tabernacle, where she was known as Mother Chisum under the leadership of the late Overseer Kathleen Moore, Pastor/Founder, now under the leadership of Pastor Carol Dennis. She loved gospel music songs like “Precious Lord Take My Hand”, “May The Life I Lived Speak For Me” and “Ride Out The Storm” just to name a few of her favorites. Sister also loved to cook big meals for her family, especially fried chicken since she loved it herself. She said that “baked chicken ran her sugar up.” Sister leaves to cherish her precious memory: six children, Lindwood Harmon (Shirleen), Josephine Spady (Eric), Albert Chisum (Dorothy), Nancy Collins, Rosa Duncan (Louis) and Debbie Davis; two adopted children, Linda Farrow (Ira) and Randolph Harmon (Moja); a grandson whom she raised, Montrolus Chisum; Caregiver and grandson Jermain Chisum; 25 grandchildren; 49 great grandchildren; 5 great-great grandchildren and two special sisters-in-law who were very dear to her, Lenora Elzey and Helen Harmon and host of nieces, nephews, great nieces, great nephews, cousins and friends. A loving, mother, grandmother, aunt, sister-in-law, cousin and friend, Sister was preceded in death by: her parents, Otho and Sarah Jane Harmon; husband, Albert Chisum; daughter, Teresa Harmon Nock; son, Jimmy Harmon; granddaughter, Ka’Nya Nock; two grandsons, Laquan Nock and Marcus Spady; three sisters, Annie Pearl Teague, Margaret Finney and Rosie Mae Richardson and two brothers, Willie Otho Harmon and Edward James Harmon. Lovingly Submitted ~ The Family

The family of Emma Carrie Chisum created this Life Tributes page to make it easy to share your memories.

Send flowers to the Chisum family.