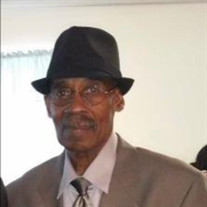 Obituary Elwood Fletcher, affectionately known as “Joo-Bug”, son of the late Elnora Fletcher and Elwood Deshields, Sr., was born on January 11, 1938. He peacefully departed this life on Sunday, December 19, 2021, at the Peak Health Care Nursing Facility in Pocomoke City, Maryland. Elwood attended school through the Worcester County public school system. He was employed in Ocean City, Maryland for several years as a Maintenance Supervisor. In the early years of his life, he did farm work along with two of his brothers, Elton and Eugene. Elwood also cut grass for many years for which he was well known. He loved life and it always showed. Dad enjoyed watching, “The Price Is Right”, riding his bicycle for exercise and doing his daily walks. He also loved going to Walmart and eating at Kentucky Fried Chicken. He had a heart of GOLD! Everyone who came in contact with him, would talk about his gentle spirit and kind heart. He will truly be missed. Left to cherish loving memories of Elwood’s life are: two daughters, Sylvia Fletcher and Teresa Fletcher, both of Pocomoke City, MD; one son, Larry Rowley; one grandson, Aaron Ballard of Laurel, MD; two brothers, Reverend Elton Fletcher of Girdletree, MD and Elwood (Jan) Deshields of Philadelphia, PA; five sisters, Viola (Robert) Davis and Georgiana Mills, both of Pocomoke City, MD, Mary Francis (Grayling) Anderson of Princess Anne, MD, Linda (Dale) Stratten and Hazel Townsend of Parksley, VA; one brother-in-law, Edward Marshall of Pocomoke, MD and a host of nieces, nephews and friends. Elwood was preceded in death by his parents, three sisters, Audrey Marshall, Pearlie Blake and Myrtle Brown and one brother, Eugene Fletcher. Lovingly Submitted ~ The Family

The family of Elwood Fletcher created this Life Tributes page to make it easy to share your memories.

Send flowers to the Fletcher family.