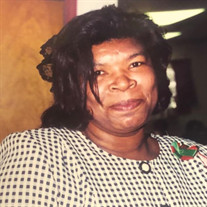 Eliese ‘Josline’ Romain Jean, was a beloved and caring wife, mother, grandmother, sister, daughter, aunt and friend. She left this world on January 7th, 2022, at the age of 61. Born to Eugene Romain and Julianna Bazil on March 1st, 1960, in Grand Goave, Haiti. Growing up she went to school and worked in Port au Prince. She was described by classmates as kind, humble, determined, and lively. She lived in Haiti until she saved up enough to come to the US in the early 80s. Once in the states, she was instrumental in helping friends and family get settled after immigrating, often providing housing, guidance, and unwavering support.   Eliese was a devoted member of the First Haitian Church of God in Blades, Delaware. As a choir member for over 15 years, she led many worship services and was a part of the Dame Missionaire Ministry. Eliese’s life's passion was volunteering in the church. She participated in countless mission trips throughout Haiti, and was known to raise funds and send goods, often personally overseeing aid distribution in her home country’s toughest times.  During one mission trip in 2003, she met her future husband, Wuilfrid Jean. Together they purchased a home in Seaford, where she has been a resident for over 35 years. She leaves behind a legacy of strong faith, hard work and a true life of service.   From longtime mother figure and mentor Se’ Marie:   Une femme sure d’elle, s’acceptant dans son integralite.  Personnalite etonnante.  Inebranlable dans ses convictions, solide en amitie, inconditionaelle, dans l’attachement a son pays d’origine.  Un esprit de famille la transformant en rassembleuse reunissant les siens aux grandes occasions. Chere amie, nous te souhaitons.  Eliese was preceded in death by her son, Widlens Eugene and grandson Na’Shawn Eugene. Eliese leaves behind her husband, Wuilfrid Jean; sister, Rose Debelle; brother, Jean Mommin; children, Jessie Romain, Josna Dormes, Yvelene Felix, Stephanie Earley, Medeline Jean, Carlancia Jean, Shonny Saint-Phard and Yvens Saint-Phard; and several grandchildren. She will be dearly missed by all who knew and loved her.

Eliese &#8216;Josline&#8217; Romain Jean, was a beloved and caring wife, mother, grandmother, sister, daughter, aunt and friend. She left this world on January 7th, 2022, at the age of 61. Born to Eugene Romain and Julianna Bazil on March 1st,... View Obituary & Service Information

The family of Eliese Romain Jean created this Life Tributes page to make it easy to share your memories.

Eliese ‘Josline’ Romain Jean, was a beloved and caring wife,...

Send flowers to the Jean family.