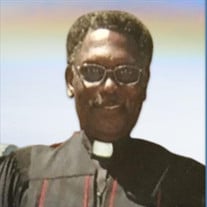 His Journey... He that dwelleth in the secret place of the most High shall abide under the shadow of the almighty. I will say of the Lord, He is my refuge and my fortress: My God; in him will I trust. Psalm 91:1-2 Ralph Maurice Stewart, Sr., a resident of Salisbury, Maryland, was born on November 26, 1936. He departed this life at the age of eighty-four (84) on September 8, 2021 at his home in Salisbury, Maryland, surrounded by his loving family members. Ralph was the eldest child of three children born to the late Horace I. and Pearl G. West-Stewart. In February of 1954, Ralph enlisted in the military where he was deployed to Okinawa, Japan and later served in the Korean War. In 2007, at the age of seventy (70), Ralph received his much sought after high school diploma from Wicomico County public schools. What a time, what a time! On October 25, 1957, he was joined in Holy matrimony to Alvera Elizabeth Wright. From this union there were four children, Phyllis A. Wright, Ralph M. Stewart, Jr., Cheryl Lynn Stewart and Jeffrey M. Stewart. Ralph and Alvera were married for sixty-four (64) years. He worked at several places of employment including Steins H.D. Metal, Campbell Soup Company, and for more than thirty (30) years, as a school bus driver for the Wicomico County Board of Education. Further, he served as past master of the Sharptown, Maryland Unity Masonic Lodge #73. Additionally, he was a former member of the Sharptown Columbia American Legion Post #296. As a young adult, Ralph gave his life to Christ at Union United Methodist Church in Delmar, Maryland where he was a Lay Minister. After many years of toiling as a servant of the Lord, he ended his journey as an Elder at the Rose of Sharon Pentecostal Church in Fruitland, Maryland under the leadership of Pastor Linton Powell. Surviving to cherish precious memories are: his wife of sixty-four (64) years, Alvera Elizabeth Wright Stewart; one daughter, Elder Cheryl Lynn Stewart and one son, Jeffrey Marcellus Stewart (Amie), both of Salisbury, Maryland; six grandchildren, Tyree Stewart, James Trower, Jr. Jeffrey Stewart, Jr. (Takisha), Shawn Tull, Sr., Latoya Stewart and Junta Trower; thirteen great grandchildren, Tyrone Morton, Jr., Devon Trower, Dejore Briddell, Aliyah Briddell, Shawn Tull, Michael Tull, Layah Tull, Matthew Stewart, Brianna Briddell, Christian Stewart, Amira Tull, Aaron Jacob Tull and Mila Lanier; one great great grandchild, Arianna Briddell; one brother, George Gale (Carolyn); two sisters-in-law, Betty A. Stewart and Pastor Ernestine Jones; brother-in-law, Leonard Waters, Jr.; one aunt, Barbara Bynum; a special cousin, Phyllis McNeil and a whole host of nephews, nieces, other cousins and friends. Ralph was preceded in death by: his parents, Horace and Pearl Stewart and Edward Bynum; daughter, Phyllis Wright; son, Ralph Stewart, Jr.; grandson, Kevin Tull, Jr.; sister, Anita McCullough; brother, James C. Stewart; father-in-law, Leonard Waters, Sr. and wife Mamie Hutt Waters.

His Journey... He that dwelleth in the secret place of the most High shall abide under the shadow of the almighty. I will say of the Lord, He is my refuge and my fortress: My God; in him will I trust.... View Obituary & Service Information

The family of Elder Ralph Maurice Stewart Sr. created this Life Tributes page to make it easy to share your memories.

He that dwelleth in the secret place of the...

Send flowers to the Stewart family.