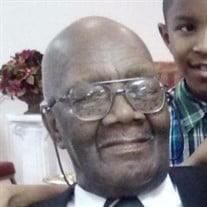 Obituary Elmer James Cannon, Jr., affectionately called Jamie, departed this life on September 6, 2021 at Coastal Hospice by the Lake after battling renal failure for years. He was born to the late Maggie Wright and Elmer Cannon, Sr. on January 26, 1934. His mother died when he was only six months old and his grandmother, Henrietta Wright, raised him along with his sister, Mary Hutt, and cousins Evelyn Wright and Dorothy. He attended the three-room Fruitland Elementary School and Salisbury High School, more formally known as the Colored High School. He left high school at age fifteen and enlisted in the United States Army during the Korean war. He completed high school in the Army, earning his diploma in the A.G.E.D. Program. His nine-year military career earned him the rank of Corporal, and included assignments in Korea, Germany and Japan. Elmer married Shirley Wright and from that union two daughters, Patricia and Betty Wright, were born. He also had a son, Michael Fountain. Additionally, Elmer helped raise children with Shirley Wilson Gladden, whom he considered his grandchildren, Hope and Charita Gladden. Working for Milford Perdue was a blessing because he came to his rescue whenever he got into trouble, He had a good friend, Joe Johnson, who was his partner in crime! To everyone in the Fruitland, Maryland neighborhood, he was Pop-Pop Jamie. He loved working on cars and did construction work with relatives in Ocean City, Maryland during the off- season. He grew up in the Rose of Sharon Pentecostal Church, which sparked and increased his faith. He left the church for a while, but the church never left him. With a made-up mind to serve the Lord, Elmer returned to Rose of Sharon and served as Senior Deacon under the Pastorate of Elder Joseph A. Gale. He later Joined Trinity Holiness Church of Christ Disciples. There he served as Deacon, Minister, Assistant Pastor and District Presiding Elder under Bishops Thompson and Dukes. Elmer was a Chaplain at Deer's Head Hospital, a position which he loved, because it granted him the opportunity to witness to those on their sick bed. He enjoyed reminiscing about his life experiences and sharing his strong faith, reminding people that God healed his body on numerous occasions. Elder Elmer Cannon was a faithfully dedicated member of Unity Christian Fellowship, where he was the senior member of Unity’s Ministerial Staff under the tutelage of Elder Dr. Clarence Polk. Elder Cannon’s wisdom was highly regarded and very respected. He also served as adult Sunday School teacher because he had a heart of compassionately genuine love for the people of God. His motto was to “give it your best shot.” He encouraged relatives and friends to attend a church and live a Holy life. Those left to cherish precious memories include: his son, Michael Fountain; grandson, Kevin Sturgis, Sr.; great-grandchildren, Kevin Sturgis, Jr., Aamiyah Sturgis, Tyreke Sturgis, Klesha Sturgis and Brittany Jackson and a host of relatives, friends and his Unity Christian Fellowship church family. Elder Elmer James Cannon, Jr. will be missed but he will be glad to meet his Creator and start a new journey. Preceding him in death were his sisters Mary Hutt, Evelyn Wright and Dorothy Fountain and daughters, Patricia Wright and Betty Wright; granddaughters, Shawanda and Angel Sturgis. SUBMITTED WITH LOVE ~ THE FAMILY

Obituary Elmer James Cannon, Jr., affectionately called Jamie, departed this life on September 6, 2021 at Coastal Hospice by the Lake after battling renal failure for years. He was born to the late Maggie Wright and Elmer Cannon, Sr. on January... View Obituary & Service Information

The family of Elder Elmer James Cannon Jr. created this Life Tributes page to make it easy to share your memories.

Send flowers to the Cannon family.