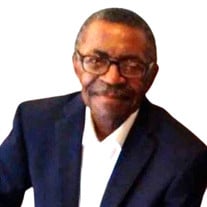 The Life of Earvine McKinley Hayward, Sr. Earvine McKinley Hayward, Sr. quietly departed this life after a brief illness on January 11, 2022 at Tidal Health Peninsula Regional Medical Center in Salisbury, Maryland, at the age of eighty-three (83). Born on November 22, 1938 in Dublin (Somerset County), Maryland, Earvine was the youngest child born to the late Isaac James and Annie Mae Hayward, and was the last surviving offspring. He grew up in the Dublin/Oaksville Community and was educated in the public schools of Somerset County. At an early age, Earvine became a member of St. Mark United Methodist Church, where he left his membership. Earvine continued to visit St. Mark during the Annual Hayward Day Celebrations. Earvine retired from the University of Maryland Eastern Shore (UMES) after thirty (30) years of service. Earvine was an avid baseball fan and loved a good hand of Bid Whist. He would often boast that he and his brother Sidney could beat anybody who sat at the table during the annual Hayward Family Unity Day. Earvine loved the Hayward Family Unity Day and was oftentimes the first to arrive so that he could partake of the family fun. Earvine was a quiet man of few words. He leaves to cherish treasured memories: his loving children, Vanessa Russell of Salisbury, MD, Stephanie Hayward of Delmar, MD and Earvine (Courtney) Hayward, Jr., Salisbury, MD; seventeen grandchildren; thirty-one great-grandchildren; seven great-great grandchildren; step-sons, David Holley, William Holley, Gordon Holley and Desmond Holley, all of Wilmington, DE; several nieces, nephews, cousins and a host of friends. Earvine also leaves to cherish his memory a special niece whom he loved as a sister, Brenda (Nelson) Cornish and a dear friend, Mary Collins, both of Salisbury, MD. In addition to his wife, Karolle Holley-Hayward, Earvine was preceded in death by his parents, sons, Eric Hayward, Sr. and Earvine Fields, his brothers, Luther, Preston, Lawrence, Littleton, Theodore, Clinton, Elue, Overly, and Sidney, as well as his sisters, Molly Corbin, Annie Mae James and Elsie Hayward. Earvine will be sorely missed by all who knew and loved him. To God be the Glory! Lovingly Submitted, The Family of Earvine McKinley Hayward, Sr.

The family of Earvine Hayward Sr. created this Life Tributes page to make it easy to share your memories.

Send flowers to the Hayward family.