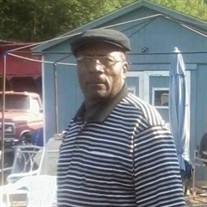 Douglas Washington Mcknight 77, of Linkwood Md (also known as Dougie Fresh, Doug, Dougie, and Brother-in-Law ) unexpectedly entered eternal life on Friday, October 15, 2021 at his home in Linkwood Md. Douglas was born on March 22, 1944 to the late Albert Mcknight and the late Mary Pinder in Hawkeye Md. Douglas received his education in the Dorchester County Public School System. After school Douglas went to Baltimore, Md. for several years. After that he returned to Dorchester County to live his life to the fullest. He was a man with many families that took on him, as well as him taking on them. Douglas was employed at the Rendering Plant in Linkwood, Md for over 40 years. In his free time he enjoyed fishing, riding his bike, welding, solving word search puzzles, and just sitting on his porch watching the cars ride by. But most of all he loved spending time with family and friends, and helping others. Douglas was an individual that would go above and beyond to help anyone that he could. Words cannot express how to describe his life. Or how he was loved by family, friends, and others. Douglas was preceded in death by his parents; Ms. Millie (whom he called his other mother),; One grandson: Khalil Douglas McKnight,; Three Brothers: Frederick Jones Sr., Albert McKnight Jr. (Tater), and Andrew McKnight,; One Sister: Phyllis Pinder; Two Nephews: Steve McKnight Jr., and Frederick Jones Jr.. And many more family members that may not have been mentioned. Douglas leaves to cherish his memory with his children: Angela Elliott (a.k.a. Angie), of East New Market, Md; Nakeya Hubbard (a.k.a. Keya), of Denton Tx; Carol Thompson (a.k.a. Puddin) of Columbia Md; Tina Johnson and Calvin (Ellana) Johnson, both of Cambridge Md; Two brothers: Clifford McKnight, and Steve McKnight; Maurine Askins, his longtime companion of 54 years; Two special ladies that he called his “sisters” Jeannie Wilson, and Janie Keene; Mykeira Ellicott (Nae-Nae) a special granddaughter that he shared an unbreakable bond with; Eight grandchildren total; Sixteen great grandchildren; Two special nephews Larry Molock, and Donald Mcknight; A few long time friends Judge Calvin Travers, Steve “The Mailman”, Perry Hall, and Robert Todd; and a host of nieces, nephews, cousins, and friends.

The family of Douglas Washington McKnight created this Life Tributes page to make it easy to share your memories.

Send flowers to the McKnight family.