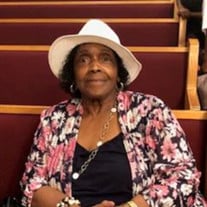 Dorothy Louise (Harris) Fisher was born on Tuesday, May 8, 1945, in Magnolia, Delaware, to the late Esther Harris and James Brown. On Thursday, October 14, 2021, Dorothy heard the call of her heavenly Father and entered into eternal rest. She was a faithful member and First Lady of Union Baptist Church and attended services until her illness. Dorothy received her education in Baltimore, Maryland and Delaware, receiving her GED in Delaware. She married Raymond Fisher, Jr. on March 11, 1961. To that union they had three sons, Michael, Maurice and Howard. Dorothy worked at Liebman’s Furniture Store in Dover until they closed. After the store closing, she remained at home to raise her three sons. Dorothy was also a sworn Delaware State Official Poll Worker. Dorothy accepted Christ at Calvary Baptist Church in Dover, Delaware and served as Sunday School teacher, BTU instructor and sang in the choir. When her husband Raymond was called into the ministry, she assisted him in many positions and the following locations: Harmony Baptist Church in Denton, Maryland; New Calvary Baptist Church in Wilmington, Delaware and Union Baptist Church in Lincoln, Delaware, where they have been for the past thirty years. Dorothy was very involved with Delaware Association of Ministers’ Wives and Ministers’ Widows for the Dover vicinity area, State of Delaware and International chapters. She held the following positions for the vicinity of Dover area: president, treasurer and was currently vice-president. She also held many international degrees within the association. Dorothy was known for her love of butterflies. She loved to go on cruises. Some of the ports she has visited are St. Thomas, St. Croix, St. Lucia, the Bahamas, Jamaica, Barbados and Australia. Dorothy was a faithful loving wife and mother and would do anything for her boys. When her sons were young, she would rent William Henry Middle School gym for dances where her sons would DJ. They were affectionally known around Dover as the “Vicious Crew”, DJ Hollywood (Howard), DJ Mikey Mike (Michael) and DJ Daddy Reese (Maurice). Every Tuesday and Friday Dorothy could be found at Spencer’s Bazaar (better known as the Sale) where she seemed to know everyone, and everyone knew her. Dorothy loved her daytime soap operas and westerns. In spite of all of Dorothy’s health issues, never once did she complain or get upset concerning her ailments. She was our Living, Walking, Talking Miracle!! For this we are forever grateful to God. In addition to her parents, Dorothy was preceded in death by her grandparents, James and Annie Harris; and sister, Delores A. Jordan. Dorothy leaves to cherish her memory her husband, Rev. Dr. Raymond Fisher, Jr.; children, Michael Fisher, Sr. (Sheryl), Maurice Fisher (Macheko), and Howard Fisher; grandchildren, Cieara Williams, Michael Fisher II, Shyhee McDowell and Iraina McDowell; great-grandchildren, Ava Hicks, Antonio Snipes, Jr., Mika Fisher, Shyhee McDowell, Jr., Shyana McDowell and Michael Fisher III; brothers, Douglas Harris (Devoral); Min. David Michael Brown, Sr. (Tameka) and James Brown (Ann); sisters, Catherine Williamson, Linda Harris, Gloria Durant (Jamie), Sandra Bailey (Howard), Brenda Bendolph (Vincent) and Victoria Brown; a very special niece, Kimberly Cromwell; niece/daughter, Jackie Fisher; and many nieces, nephews, cousins, friends and church family.

Dorothy Louise (Harris) Fisher was born on Tuesday, May 8, 1945, in Magnolia, Delaware, to the late Esther Harris and James Brown. On Thursday, October 14, 2021, Dorothy heard the call of her heavenly Father and entered into eternal rest.... View Obituary & Service Information

The family of Dorothy Louise Harris Fisher created this Life Tributes page to make it easy to share your memories.