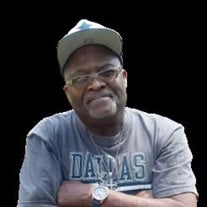 Donnie’s Journey... Donald James Dashiell, Jr., affectionately known as Donnie, departed this life on Sunday, November 7, 2021, at his home in Delmar, Maryland. Donnie was born in Salisbury, Maryland to the late Donald James Dashiell, Sr., a Sergeant Major in the United States Marine Corps and Martie Mae Church-Dashiell, a Special Needs Teacher. Donnie was the eldest of four siblings. Due to his father being stationed in different parts of the country, Donnie received his early education in Hawaii, California, and North Carolina. In 1969, Donnie had the home run record in the little league in Camp Pendleton, California. The Dashiell family eventually returned home to Salisbury, Maryland where Donnie graduated from James M. Bennett High School in 1977. Upon graduation, Donnie attended the University of Maryland, College Park. He later transferred to Salisbury State College (now Salisbury University), where he received his Bachelor’s degree in Communications. He gained an internship as an engineer at WCPB, an affiliate of the Public Broadcasting Service (PBS). While in college, Donnie met the love of his life, the late Tanya A. Taylor of Washington, DC. They were married on December 28, 1985. Of this union, they had two children, Candice and Donald III, affectionately known as Boy-Boy. Donnie was a hardworking man! Following his internship with PBS, he was employed at the Holly Center in Salisbury, Maryland as a Residential Aide before beginning his career at AI Dupont in Seaford, Delaware, alongside his best friend. He retired from Dupont in 1999, following many years of dedicated employment. Donnie loved family, music, sports, church and his friends. Most of all, he loved the Lord and his three grandchildren, Zyan, Trinity and Kai’mere. Donnie is survived by his daughter, Candice Taylor-Dashiell and his son, Donald J. Dashiell III; grandsons, Zyan and Kai’mere; granddaughter, Trinity; three brothers, Reginald V. Dashiell, Trent A. Dashiell (Centra) and Roland L. Dashiell (Jorgette) as well as his nephews, aunts, uncles, cousins and friends. The Family

The family of Donald James Dashiell Jr. created this Life Tributes page to make it easy to share your memories.

Send flowers to the Dashiell family.