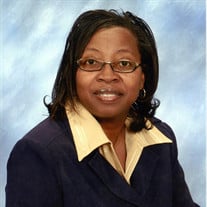 DEBORAH’S JOURNEY... Deborah Ann DeShields, a resident of Glen Burnie, Maryland, formerly of Dames Quarter, Maryland, departed this earthly life on January 5, 2022. Fondly known as Debbie to most, she was born on May 16th, 1959 to Ida White Thomas and the late Lewis White, Sr. She was one of four girls and two boys. Debbie was a member of Macedonia United Methodist Church under the leadership of Reverend De’Angelo Johnson where she served on several committees. Her favorite song to sing was “Walk Around Heaven All Day.” Debbie received her early education in Somerset County school district and the University of Maryland Eastern Shore (UMES). She joined the Army National Guard in 1986 before enlisting full time in 1989. After serving several years in the military, she retired to start a career with the Division of Corrections (DOC). During her tenure with the DOC, she became one of the first black female drill instructors at the Herman L. Toulson Boot Camp. She held various positions and titles including the audit and tact team. She decided to retire after twenty-three (23) years as an Administrative Major. She took a two-year break before returning to the workforce as a security guard with Allied Services. She quickly climbed the ladder, becoming a Lieutenant. Affectionately known as Ma, Mimi, the Warden and L.T., Debbie had a kind, genuine heart and would give anybody the shirt off her back. She was known all throughout the state of Maryland for her singing and skits. Debbie and Hilton were united in holy matrimony in 2006. The couple enjoyed their life together. Precious memories of Deborah’s life and legacy will be cherished by: her husband, Hilton of Salisbury, MD; her daughter, Marita (Rahul) of Delaware; her son, Demetrius of Baltimore, MD; a stepson, Hilton DeShields, Jr. of Prince Georges County, MD; her parents, William and Ida Thomas of Princess Anne, MD; three sisters, Veronica (Howie) Moore of Jersey City, NJ, Jacqueline Townsend of Salisbury, MD and Angela (Franklin) Hitch of Philadelphia, PA; one brother, Curtis (Stacy) White of Salisbury, MD; four aunts, Shirley Finney of Salisbury, MD, Gilder (Thomas) Downing of Woodlawn, MD, Maizie Archer of Odenton, MD and Evonne Williams of Salisbury, MD; one uncle, Douglas White of Salisbury, MD; six grandchildren, Jacquia (Carl), Terrell, Sa’Von, Sr., Najae, Kobe and Nevaeh; nine great grandchildren, Zion, Bella, Cayden, Sa’Von, Jr., Kyrie, Kaylani, Nalani, Carter and Tu’Lee; a host of nieces, nephews, godchildren, cousins, other extended relatives and friends and several special friends, Sylvia Hancock, Elaine Cottman, Sheila Edwards and June McCleese, amongst a few. Preceding her in death, in addition to her father, Lewis, Sr., were Lewis, Jr. (brother), Sylvania (daughter), De’Shaun (nephew), Hanson and Medoria Wigfall (grandparents) and several other family members. LOVINGLY SUBMITTED THE FAMILY

DEBORAH&#8217;S JOURNEY... Deborah Ann DeShields, a resident of Glen Burnie, Maryland, formerly of Dames Quarter, Maryland, departed this earthly life on January 5, 2022. Fondly known as Debbie to most, she was born on May 16th, 1959 to Ida... View Obituary & Service Information

The family of Deborah Anne deshields created this Life Tributes page to make it easy to share your memories.

Send flowers to the deshields family.