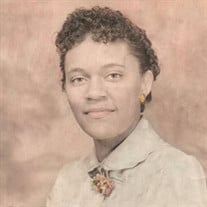 Daisy Nell Carpenter-Owens, affectionately known as Mother Daisy, transitioned from this world into the presence of the Lord, on December 16, 2021. She was born on November 26, 1939, in Elba, Alabama, to the late Vincie and Payton Carpenter. She had one brother, QP, who preceded her in death. Ms. Daisy attended Elba High School, where she excelled in her academic studies. She made many friends because of her sweet personality and demeanor. She was an active member of the Rocky Head Missionary Baptist Church, where she served as an usher and sang on the choir. Daisy moved to Jersey City, New Jersey, years later, in search of better employment opportunities. In May of 1959, Daisy was joined in holy matrimony to the love her life, Wilson Owens. They began their family while living in New Jersey. God blessed them with a son, Harold, and a daughter, Donna. They were active members of Gospel Tabernacle Church of God In Christ, where Ms. Daisy also served on the usher board and sang on the choir. Ms. Daisy earned a certificate in Business Administration. She had a successful career as a secretary at the University of Medicine and Dentistry in Newark, New Jersey. In addition, she continued to be a devoted wife and mother, ensuring that her family also thrived in their daily lives. Mr. & Mrs. Owens were hard-working people. They instilled the importance of having a good work ethic in their children. They taught them that if they worked diligently, they could obtain what they desired in life. Both Daisy and Wilson were talented cooks. They owned their own barbeque restaurant, called Brothers Family Restaurant. People would come from miles to enjoy their cuisine. The Owens family relocated to Fanwood Scotch Plains, New Jersey, where they continued to work at making their dreams become reality. Upon retirement, the Owens family relocated to Camden-Wyoming, Delaware. Mother Daisy was extremely refined, kind, and personable. She enjoyed having a good time with family and friends and playing board games. She enjoyed shopping for the finer things in life. If it wasn’t good quality, she didn’t want it! Most importantly, Mother Daisy was a woman of faith, who loved praying and serving the Lord. When her husband preceded her in death, her faith did not waiver, because she knew that her help and strength came from God. Mother Daisy leaves to cherish fond memories to her children, Donna Owens of Magnolia, DE and Harold Owens (Lisa) of Georgia; grandchildren, Alicia (Darshann)) and Marquis; great-grandchild, Olivia; and a host of other relatives, church family and friends.

Daisy Nell Carpenter-Owens, affectionately known as Mother Daisy, transitioned from this world into the presence of the Lord, on December 16, 2021. She was born on November 26, 1939, in Elba, Alabama, to the late Vincie and Payton Carpenter.... View Obituary & Service Information

The family of Daisy N. Owens created this Life Tributes page to make it easy to share your memories.

Send flowers to the Owens family.