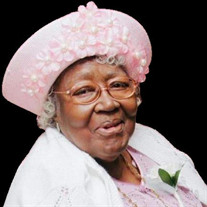 Daisy Velma Lee Griffin Daniels, daughter of the late William Abe & Clara Harrell was born on August 7, 1917 in Millpond, located in Pasquotank County, NC. She went home to be with the Lord on October 19, 2021. She is one of 13 children, ten girls and three boys. At 104 years old, Daisy is the last sibling in her family. She was educated in Millpond schools up to the ninth grade. Her mother Clara told her she had to leave school to work in the fields. She was introduced to Garfield Weldon Daniels Sr. by her brother Shelton “Buck” Griffin and was united in holy matrimony in Norfolk, Virginia in 1938. They were married in her sister Evelyn’s home. The family lived in Norfolk, Virginia for ten years. From this union was thirteen children, eight boys and five girls. Seven was born in Norfolk, five in North Carolina, and one in Delaware. The family moved to North Carolina in 1948. While living in North Carolina, she worked hard to take care of her family. Caring for her family, was her legacy and love. Hard work was no stranger to her. She worked in the potato, cotton and bean fields with her older sons and daughter. Five a.m. came early for them to catch the truck and off to the fields. Mrs. Daniels also worked for the Sawyer family, babysitting and cleaning. She attended and was saved at the Mt. Camel Baptist Church, in Newland, North Carolina. Her active prayer life and involvement at Mt. Carmel kept her busy as she involved her family in church ministries. Her love for God, family, and church motivated her… regardless of the 3 miles walked each Sunday, to show the value of spiritual foundations. Usually, they were the first to arrive. This modeling of Christian faith continued until she died in varied forms. Her Christian upbringing started early in life, and she instilled the same family values in her children, just as her parents did to her and her siblings. Her father was always there to give her a helping hand by planting a garden, raising pigs, chickens and cows. One of her passions was raising baby chicks to adulthood. Ask Griffin and Fred about the baby chicks sometime. In 1957, the Daniels family moved to Delaware to seek a better way of life. Upon arriving in Delaware, she stayed briefly with her niece Essie Fountain in Milton, Delaware, and eventually moved to Slaughter Neck. There were many challenges that faced the family of 13, however she always looked on the bright side of any situation and trusted God to bring them through. As the children became older, she decided to go to work. Mrs. Daniels worked at King Cole canning factory in Milton, Delaware, and as a teacher at the Slaughter Neck Day Care Center, where she was affectionately called Mom Mom. She retired from the Day Care Center in the early eighties. Mrs. Daniels was a faithful, dedicated and loyal member of Wesley Chapel United Methodist church for over 64 year. Her servanthood was expressed through the varied ministries in which she participated. Some included, being a member of the senior choir, United Methodist Women, Sunday school teacher, prayer warrior team, James Jefferson, Sr. evangelistic team, and the Administration Board, just to name a few. She was a faithful steward for the Lord, unwavering, loyal, and humble. She was always there to help anyone in need. Her love for God and others was powerful. Her children never heard her gossip about others. Instead she taught her children to love as Jesus loves and learn to forgive. Her two requests from God, was to see all of her children become adults and get saved. This was her on going prayer. The prayer of a MOTHER’S HEART UNTO GOD. She did not mind saying it everywhere she had the opportunity. Lord save my children…later Lord save my grandchildren. Mrs. Daniels was not ashamed of the gospel of Jesus Christ. She attended and supported the Daniels Family Gospel Singing Group for over 25 years where she gladly shared her testimony about God saving her family. Also, it didn’t matter whether she was in Walmart or Save-a-Lot ( her favorite store) she would witness to others. ….what a Legacy! Her gentle, humble spirit drew people to her. To know her was to love her. To many, she will be remembered for her delicious cornbread and good home cooking. And she loved flowers and working in soil. She leaves to cherish her memories, five daughters, Rev. Dr. Jeanel Starling (James) Roslyn Daniels Harris (James), Evelyn Daniels Travis (Norman), Cynthia Daniels Williams (Robert), Kim N. Daniels, six sons Fredrick Elwood Daniels Sr., Vance Griffin Daniels Sr., Lloyd Nelson Daniels Sr.(Bertha} Maurice Wyndell Daniels Sr. (Charmaine), James Abel Daniels (Anita), and Kimphus Clinton Daniels. Forty-seven grandchildren, 135 great grandchildren, 132 great-great grandchildren, and 12 great-great-great grandchildren children. A host of nieces, nephews, cousins, friends, and Wesley Chapel church family. Who can find a Virtuous Woman, Daisy Velma Lee Griffin Daniels is that woman.

Daisy Velma Lee Griffin Daniels, daughter of the late William Abe & Clara Harrell was born on August 7, 1917 in Millpond, located in Pasquotank County, NC. She went home to be with the Lord on October 19, 2021. She is one of 13 children,... View Obituary & Service Information

The family of Daisey Daniels created this Life Tributes page to make it easy to share your memories.

Send flowers to the Daniels family.