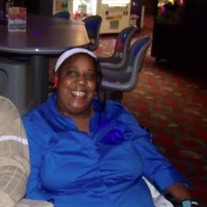 It is with deep sorrow and much love that we mourn the passing of Crystal Anne Moore.  Crystal Anne Moore 55, of Dover, Delaware, died peacefully on Monday, December 13, 2021, at her home. She was born on November 26, 1966, in Dover, Delaware, to Virginia Lewis and Willie Moore, Sr. Crystal graduated from Dover High School, class of 1984. She was well known for her athletic abilities in track and field. She even held a shot-put record for Dover High School. Crystal attended Delaware State University for studies in Criminal Justice/ Human Development, briefly, in 1985. In 1989, she graduated from Keystone Job Corps Nursing Program as a Certified Nursing Assistant CNA. She later became a Child Care Worker for the State of Delaware until she became ill in 2010. Crystal loved her family and always wanted them around. There was something about her big smile that felt like home. She didn’t take “no mess” but her love for you remained the same. Crystal would have given her last to put a smile on your face, even if it meant not having one on her own. Her heart was so big and even on her bad days she fought to see the better days. Crystal was preceded in death by her mother, Virginia R Moore; grandmother, Vergie P Lewis; aunt, Cathryn Lewis and grandson, Quaivere Hunter. Crystal is survived by her father Willie Moore; two daughters, Severa Hunter (Quaison Hunter) and Sebrina Moore (Jamahl Harris)of Dover, DE; eight grandchildren, Sai' von Moore, Hassan Hunter, Quaivohn Hunter, Jiannah Harris-Moore, Qimani Hunter, Iyanna Shelton, Quaison Hunter, Jr., and Tray-von Hunter. She is also survived by a sister, Adrienne Moore of Washington, DC; two brothers, Willie Moore, Jr. of Middletown DE and David Moore of Dover, DE; dearest friends, Mia Copes and Linda Page; as well as a host of nieces, nephews and cousins.

The family of Crystal Anne Moore created this Life Tributes page to make it easy to share your memories.

It is with deep sorrow and much love that we mourn the passing...

Send flowers to the Moore family.