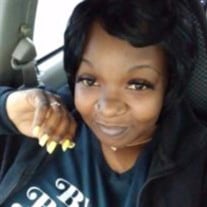 COTRENNA&#8217;S JOURNEY Cotrenna Marie Drayton was born on Tuesday, February 9, 1988. The daughter of the late Angela Joy Handy and Michael Dornell Coleman, she departed this life at the age of thirty-four (34) on February 24, 2022 at Tidal... View Obituary & Service Information

The family of Cotrenna Marie Drayton created this Life Tributes page to make it easy to share your memories.

Send flowers to the Drayton family.