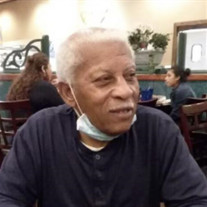 Clifford Hughes, Jr., was born on Wednesday, August 9, 1939, in Greenwood, Delaware, to Clifford Hughes, Sr. and Catheleen Hughes. On Saturday, September 4, 2021, he peacefully departed this life at the age of 82. Clifford, who some called Toby, was a graduate of William C. Jason Comprehensive High School. He was on the football team and received the honor of being voted Best Dressed. Clifford met his wife, Joyce V. Irvin, at William C. Jason Comprehensive High School. They were married on December 6, 1961. From this marriage, they were blessed with two children, Ricky Hughes of Greenwood, Delaware and Leslie Hughes-Mitchell of New Castle, Delaware; four grandchildren, Ebonie Carzo (Watson Carzo) of Atlanta, GA, Ricky Hughes, Jr. and Deshawn Hughes both of Greenwood, DE, the late Christian Mitchell and two great-grandchildren, Kameron Hughes, and Watson Carzo II. At the completion of one year of college, Clifford was drafted into the United States Army, where he earned his paratrooper wings in the 82nd Airborne Division. During his service, Clifford was a model Private/serviceman who through skill and precision mastered his ground training and troop inspections, which often led to him being awarded extra military weekend passes to visit his family. After his military career, Clifford learned construction from his father. He also attended a trade school to learn barbering. This led to him opening a barber shop in Harrington. Clifford worked at General Foods for several years, and in his free time, he enjoyed gleaning various skills from a network of professional friends. He obtained his dealership license to operate an independent car dealership and also became skilled at car mechanics and operating construction equipment. In addition, he started a fishing business from the back of his pickup truck. Clifford was employed by Diamond Chrysler as a Robotic Maintenance Technician. He worked at Diamond Chrysler for over 20 years before retiring in 2002. In addition to being a full-time employee, Clifford had an entrepreneurial spirit. This led to him entering the real estate industry as a landlord/property manager. The skills that he learned along the way were painting, electrical work, plumbing and HVAC complemented his property management business. In addition to his businesses, Clifford used his skills to help family, friends and many in the community. Those who knew Clifford could count on him to offer a funny saying or clever response to make people laugh. Listening to gospel quartets was his favorite pastime. Clifford was preceded in death by his parents, Clifford Sr. and Catheleen Hughes; sister, Ellen Mae Brady; in-laws, Mary Hughes, Harrison Smith and Shirley Taylor (Pete); and grandchild, Christian Mitchell. Clifford leaves to cherish his memory, his wife of 59 years, Joyce Hughes; his children; grandchildren; great-grandchildren; two brothers, Harold Hughes of Wilmington, DE and Timothy Hughes (Shelita) of Smyrna, DE; special aunt, MaryAnn Scott of Harrington, DE; one daughter-in-law, Paula Hughes of Milford, DE; son-in-law, Marcus Mitchell of Newark, DE; brothers and sisters-in-law, Norman Brady, Jr. of Milford, DE, Janice Parson (Freddy) of Georgetown, DE, Barbara Reese (Perry) of Easley, NC, Pastor Frances Irvin of Salisbury, MD, Marcella Smith of Frankford, DE, Clemon Irvin (Mary) of New Haven, CT and Theodore Irvin (Jane) of Millsboro, DE; and a host of nephews, nieces, family and friends.

Clifford Hughes, Jr., was born on Wednesday, August 9, 1939, in Greenwood, Delaware, to Clifford Hughes, Sr. and Catheleen Hughes. On Saturday, September 4, 2021, he peacefully departed this life at the age of 82. Clifford, who some called... View Obituary & Service Information

The family of Clifford E. Hughes Jr. created this Life Tributes page to make it easy to share your memories.

Send flowers to the Hughes family.