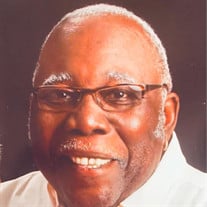 Clarence Eugene Wilson, Sr., 78, was born June 22, 1943, in Rock Hall, Maryland. Clarence was affectionally known as “Brother” or “Turtle”. He was a devoted husband, brother, father, a caring grandfather, uncle and friend to many. Clarence attended Sharptown Elementary School and Garnett High School. He was a member of Aaron Chapel United Methodist Church, in Rock Hall, Maryland, and was a member of the Usher Board. He worked various jobs in the area, and was a member of the Local Union 199, of Wilmington, Delaware. He was also a member of the Elks, IBPOE of W. Rock Hall, Maryland. Clarence’s favorite time of the year was football season. He enjoyed watching his famous team the “Pittsburgh Steelers”. Clarence was preceded in death by his parents, Elizabeth and Roger Wilson; and sisters, Edna, Olivia, Clara and Rosie. Clarence leaves to cherish his memories, his loving wife of 55 years, Dorothy Ann Wilson; sisters, Agnes Danner of Philadelphia and Hilda Sisco of Rock Hall; sister-in-law, Florence Hopkins of Rock Hall; brother-in-law, Russell Laster of Rock Hall; three sons, Clarence (Linda), Daniel (Jonnise) and Devanon (Erica) all of Delaware; two daughters, Tessa (Mike) of Virginia and Lydia (Marvin) of Worton; 17 grandchildren; 12 great-grandchildren; special friends, George Hynson, Orvin Elliott and Charles Scott, Sr.; and a host of nieces, nephews, cousins and friends. Do not let your hearts be troubled. You believe in God; believe also in me. My Father’s house has many rooms; if that were not so, would I have told you that I am going there to prepare a place for you? And if I go and prepare a place for you, I will come back and take you to be with me that you also may be where I am. John 14:1-6  “

The family of Clarence Wilson Sr. created this Life Tributes page to make it easy to share your memories.

Send flowers to the Wilson family.