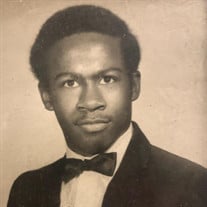 Clarence Richard Shockley III, was born on Friday, October 17, 1952, to Clarence Shockley, Jr and Sarah Ann Burbage, both of whom preceded him in death. Shock or Ricky as he was affectionately known by friends and family, transitioned from this life on Saturday, August 21, 2021, at Bayhealth Hospital, in Dover, Delaware, after a long illness. Ricky was educated in the Chester-Upland School District in Chester, Pennsylvania, where he was known to be exceptional in mathematics. He graduated from Chester High School in 1969. Upon graduating, Ricky enlisted in the United States Air Force, and served his country for four years. His math skills paved the way for him to serve as an engineer during his military career. He married his beloved wife of 44 years, Florence, on October 26, 1974. Together they built a life, raising their three children, with whom he had endearing relationships. During their time together he enjoyed chess and boxing as hobbies, stimulating both his mind and body. Shock’s all-time favorite activity was fishing. He enjoyed visiting a host of special friends, Peety, Bones, Johnnie and Dwayne in Chester where grew up. He also had a special relationship with his granddaughter, Randi, who visited him frequently while he was in the nursing facility and while he was hospitalized. Ricky’s last employment was completed at the Perdue Chicken Plant, in Milford, Delaware. He worked as a laborer for seven years for Perdue. Shock was predeceased by his oldest sister Barbara A. Robinson but he leaves to cherish his memory, his wife Florence; sister, Bertice Williams; sons, Clarence Lawine Shockley IV, Randolph Shockley; daughter, Clarissa Shockley; a host of grandchildren, great-grandchildren, nieces and nephews. Clarence Richard Shockley will be greatly missed.

Clarence Richard Shockley III, was born on Friday, October 17, 1952, to Clarence Shockley, Jr and Sarah Ann Burbage, both of whom preceded him in death. Shock or Ricky as he was affectionately known by friends and family, transitioned from... View Obituary & Service Information

The family of Clarence Richard Shockley III created this Life Tributes page to make it easy to share your memories.

Send flowers to the Shockley family.