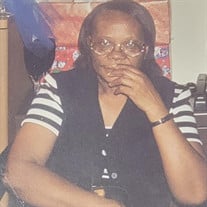 Christine Williams was born April 14, 1940, at Grady Hospital in Atlanta, Georgia, to the late Theodore Williams and Clarice Curry. She departed from our lives on December 29, 2021, at home. Christine attended school in the Georgia Public School System and graduated from Luther Judson Price High School in Atlanta, Georgia. Christine moved to Harlem, New York, as a young lady, after giving birth to her daughter, Victoria Thompson. She then met and married merchant marine, Samuel Williams. From this union they had three sons, Jerry, Wayne and Alfornzo. She and Samuel moved to Brooklyn, New York, into Albany projects, where she lovingly raised their family. There she found her love for baking, and for a time, owned a bakery across from her home. Everyone loved her delicious three-layer cakes, and she enjoyed making them for others. She loved her children and would do anything for them. She enjoyed spending time with her friends and family, and was always willing to cook or play cards at a moment’s notice. She adored all of her grandchildren and even assisted with raising some of them. In 1977, Christine worked at the Marcus Garvey Nursing home in Brooklyn, in the housekeeping and laundry department. She was promoted to a supervisor before retiring in 1997. She later moved to Milton, Delaware. Christine leaves to cherish her memory, her husband of sixty years, Samuel; daughter, Victoria Thompson; sons, Jerry Williams (Wendy), Wayne Williams and Alfornzo Williams (Erica); brothers, Theodore Williams, Jr., Marvin Williams (Maria) and Jarvis Williams (Sherry); stepsons, Michael Williams (Rose) and Linwood Brown; granddaughters, Darlene Hyman and Shreese Williams; grandsons, Anthony, Larry, Tracy, Kenton, Melvin, Antoine, Darryl Jr., Jamal, Deshawn and Alshawn; several great-grandchildren; great-great grandchildren; and a host of nieces, nephews, cousins and friends.

Christine Williams was born April 14, 1940, at Grady Hospital in Atlanta, Georgia, to the late Theodore Williams and Clarice Curry. She departed from our lives on December 29, 2021, at home. Christine attended school in the Georgia Public... View Obituary & Service Information

The family of Christine Williams created this Life Tributes page to make it easy to share your memories.

Send flowers to the Williams family.