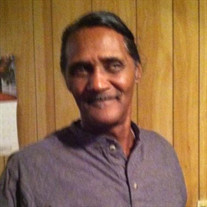 HIS LIFE AND LEGACY Charles Keith Matthews, Sr., lovingly called “Charles Keith” and Huxtable, Charlie and Buncle Keith by those who knew him affectionately, departed this life on Tuesday, January 11, 2022 at Tidal Health in Salisbury, Maryland. He was the 6th child born to the late James and Thelma Matthews. Charles Keith attended public schools in Wicomico County, Maryland. At a young age, he moved and resided in Baltimore, Maryland, moving back later in the 1990’s after living there for thirty-five (35) years. He worked several jobs while living in Baltimore and later retired from Mountaire in 2011. At a young age, Charles Keith was known for being an excellent gymnast. More than anything, he loved his family. He also enjoyed playing cards, sports, watching scary movies and listening to his music. He leaves to cherish fond and loving memories of his life: four children—two sons, Charles Matthews, Jr. (Keisha) of Salisbury, Maryland and Vernon Matthews of Baltimore, Maryland; two daughters, Stacey Matthews of Conyers, Georgia and Sekethia Matthews of Philadelphia, Pennsylvania; one brother, Gary Parks of Delaware; four sisters, Reba Matthews and Thelma Dashiell (Bob), both of Salisbury, Maryland, Shelley Matthews of Charlotte, North Carolina and Levon Wescott of Philadelphia, Pennsylvania in addition to a host of grandchildren, great grandchildren, nieces, nephews and family, In addition to his parents, he was preceded in death by two brothers, Aaron Matthews and James Matthews III and two sisters, Michelle Matthews and Jacqueline Turner. LOVINGLY SUBMITTED THE FAMILY

HIS LIFE AND LEGACY Charles Keith Matthews, Sr., lovingly called &#8220;Charles Keith&#8221; and Huxtable, Charlie and Buncle Keith by those who knew him affectionately, departed this life on Tuesday, January 11, 2022 at Tidal Health in Salisbury,... View Obituary & Service Information

The family of Charles Keith Matthews Sr. created this Life Tributes page to make it easy to share your memories.

Send flowers to the Matthews family.