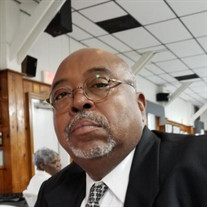 Brian Jarrell Gillis, quietly transitioned from his earthly home in Seaford, Delaware, to his eternal home during the morning hours on Saturday, October 9, 2021. His wife, Shirley, lovingly honored his wishes to transition at their home. His loving wife, immediate family and close friends surrounded Brian during his transition. Brian was born March 22, 1961, in Dover, Delaware. He was one of ten (10) children born to Rosetta Gillis. Brian’s mother passed at an early age and his grandmother, Ella Reed, raised him. Affectionately called Gil, he lived a brief, but full six decades of life and was BLESSED to have had a great impact on all those he encountered during his life journey. Brian received his formal public education through the Smyrna Public Schools and immediately became involved in the world of work. Brian began his career of work with a brief period with the Job Corps and then the State of Delaware Department of Maintenance, Building and Grounds. He left that position to begin his ten (10) years employment as a supervisor at Nanticoke Memorial Hospital in Seaford, DE. Brian then began working at the Harrington Raceway and Casino as the Executive Director of Support Services for the last twenty-five (25) years until the onset of his declining health earlier this year, which made it prohibitive for him to work. Brian also worked part time the last ten (10) years at The Manor House in Seaford, which he had identified as his retirement job. Brian was loved and held to high regard by all his peers at work, those he supervised, as well as, the patrons at the Harrington Raceway and Casino. One of Brian’s greatest joys was riding his motorcycle. He was one of the Founding Fathers of the National Association of Buffalo Soldiers and Troopers Motorcycle Club, Inc. (NABSTMC). During the early years of the organization he was elected the National Treasurer. The NABSTMC added over forty-five (45) chapters during his tenure on the Executive Staff as National Treasurer. He was also one of the Founders of the Delaware Buffalo Soldiers Motorcycle Club, Inc., which under his leadership became the largest chapter in the NABSTMC. Brian selflessly dedicated countless hours, money and traveled thousands of miles in support of the aforementioned association and clubs. Brian’s character and influential demeanor touched the lives of many. His lighthearted approach to life was appreciated, as well as, his commanding presence when there was a task that demanded the collective efforts of all. He was a dedicated and loving family man and friend. He enjoyed helping others even though at times he refused help from others especially if he thought it would be an inconvenience. He was honest, reliable, trusted, as well as, a very proud man. Days when he didn’t feel well himself, he continued to be active to ensure that family members and friends were well. A measure of a man’s success is measured by how many people love and respect him. (African Proverb) To truly know Brian was to love and respect him. He leaves us with lasting memories that we can embrace forever. Brian was preceded in death by his mother, Rosetta Gillis; grandmother, Ella Reed; and brother-in-law, Eugene Jackson (Lola) . Brian leaves to cherish his precious memory, his loving wife of thirty-two years, Shirley Gillis; two stepsons, Andre Batson (Terri), Tremain Batson; granddaughter, Ti’ Anna Harris, the love of his life, all of Seaford, DE; and godson, Jalen Gillis. Brian is also survived by nine siblings, Juanita Taylor of Highland, CA, Barbara Wright of Clayton, DE, Cheritta Marvel (Clarence) of Smyrna, DE, Phyllis Marvel (Lawrence) of Smyrna, DE, Veronica Haman (Joseph) of Odessa, DE, Arnold Gillis of Cheswold, DE, Clinton Gillis (Carolyn) of Dover, DE, Yvonne Gillis-Fountain (Lance) of Smyrna, DE and Damon Gillis (Aimee) of Milford, DE; in-laws, Henrietta Cannon (Donald) of Seaford, DE, Thomas Jones of New Castle, DE, Emerson Jones (Marion) of Seaford, DE, Mary Duker (Tim) of Seaford, DE; a special friend who was like a brother, Dale “DK” Brown I (Tina) of Greensboro, MD; and a host of nieces, nephews, great nieces, great nephews, cousins and friends.

Brian Jarrell Gillis, quietly transitioned from his earthly home in Seaford, Delaware, to his eternal home during the morning hours on Saturday, October 9, 2021. His wife, Shirley, lovingly honored his wishes to transition at their home. His... View Obituary & Service Information

The family of Brian J. Gillis created this Life Tributes page to make it easy to share your memories.

Send flowers to the Gillis family.