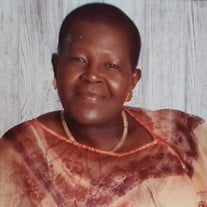 Betty Ann Gross Brooks, was born on February 13, 1957, to the late John Robert Gross, Jr., and Betty Mae Gross, in Easton, MD. She departed this life peacefully at home on January 4,2022. She was 64 years old. Betty, formally known as “Ann”, attended Queen Anne’s County Public Schools, graduating in 1976. Upon completion of school, Ann attended Chesapeake College majoring in Criminal Justice. Ann loved to cook, making this her main occupation. If you need an organized, committed, independent caterer, call Betty Ann. She would cater your event either big or small. She spent many years cooking at the Queen Anne’s County Detention Center, along with several nursing homes including William Hill Manor and Corsica Hills Nursing Home. Ann has earned several certificates of acknowledgements while employed with Queen Anne’s County Detention Center. After retiring she work for Queen Anne’s County Board of Education and some private Contractors as a Bus Driver until her health started to fail. Ann was a former member of the Bethel A.M.E. Church and the choir, “Voices of Faith”. She shared her strong, beautiful voice with many. She was a dedicated member of the “Sisters of 76” Women’s Club, where she’d participate in dinners, and social gatherings sharing much laughter and conversations. Ann enjoyed spending time with her children and grandchildren. It was very rare that you would see her without her daughter on her side. There was never a time that her son wouldn’t have her in tears either while in her presence or over the phone. She also enjoys completing her giant crossword puzzles and watching “Young and the Restless” and “Bold and Beautiful”, where peace and quiet was required by everyone! She would then call her sister, Lorene and cousin, Beverly and discuss the events as if they knew these people. Ann was a “straight shooter”. She may not always say what you want to hear but best believe, she meant what she said when she said it and voiced with love. Ann was preceded in death by her parents, John and Betty; maternal and paternal grandparents; niece, Felicia Demby; one brother-in-law Ralph Wright; one sister-in-law Francis Wheeler; eleven uncles, Herbert, Raymond, Walter, Frank (Gross); Gordon, Ronald, Donald, James, George, Charleston, and Wallace (Green); four aunts, Lillian Hawkins, Marie Gross, Evelyn Green and Gertrude Ryans. She leaves to cherish her memory, former husband of thirty-eight years, Charles W. Brooks 3rd; two children, Tyron Brooks of Chester, MD and Chamine Brooks of Chestertown, MD; one stepdaughter, Shartinese Rochester of Queenstown, MD; three granddaughters, Tamani Brooks of Smyrna DE, Jurnee Brooks-Wilson of Centreville MD and Trinity Brooks of Chester MD; four grand-sons, Cy Lerner of Centreville MD, Jasai Barney, Tori’En Wright and Justin Reeves, Jr. all of Chestertown MD; one step-granddaughter, Kashmira Brown- Rochester of Queenstown, MD; four brothers, John R. Gross 3rd (Cheryl) of Centreville MD, Vernon Gross (Tracy) of Worton, MD, Christopher A. Gross of Chester, MD and Michael Gross of Annapolis MD; two sisters, Patricia Wright of Chester, MD and Lorene Henry (Charles) of Centreville MD; two aunts, Jean Turner of Queenstown MD and Helena Griffin of Preston MD; one uncle, Edmond Green; one goddaughter, Whitney Gross of Centreville MD; one godson, Aukeem Cheers; a very special cousin, who was more like a sister, Beverly Clark; one whom she treated like a son, who also helped take care of her during her last days, Justin Reeves; and a host of nieces, nephews, cousins and friends. Loving submitted, The Family.

The family of Betty Ann Brooks created this Life Tributes page to make it easy to share your memories.

Send flowers to the Brooks family.