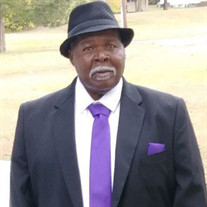 Obituary Aydelotte Alfred Deshields, Sr. was born to the late Daniel James Deshields and Georgia Elizabeth Mears on Monday, September 19, 1949. He departed this life on Saturday, January 1, 2022 at Tidal Health in Salisbury, Maryland. “Link” or “Poor Boy” as everyone called him, received his education in the Worcester County public school system, graduating in 1968. After graduating high school, Link went straight to the Armed Force, where he served in the Vietnam War. After his term in the military, Link began working for the Town of Snow Hill for over 35 years, before retiring in 2012. In 1981, Link was united in holy matrimony to his late wife, Audrey Mae Deshields and from that union, two sons were born. Until the second God called him home, Link’s love for his family was unquestionable. The needs of his wife, children, grandchildren and other relatives were his priority, never hesitating in putting their needs before his own. Although it was his immediate family who primarily benefitted from Link’s sacrificial attitude, he did not hesitate to help anyone who asked. Link’s death has hit straight to the heart of our small town. He was the bright spot in a world of many. Family, friends and neighbors would seek Link out because of his ability to help or “save the day.” Collins St. was the place to be! It will never be the same. Although Link didn’t talk much (if he didn’t know you), he would give you the clothes off his back and some “change” in your pocket. That was just the type of man he was. During his retirement, Link enjoyed cutting grass, cleaning his car, sitting on the porch, driving up and down town, and as he used to say, “going to the office”, which was the local park with friends. Special friends included: “Hudson”, Randy, Wayne, Darn, “Beasley” and the late Clifton, just to name a few. Link was a simple guy. He didn’t let much get to him. Whenever something went wrong, he would always respond with “it’s life, we got to move on.” He lived by that. Along with his parents, Link was preceded in death by his wife, Audrey Mae Deshields, four brothers, Blake, Jim, Sylvester and Edward, one sister, Rosa Lee Bratten and one daughter, Tracey Deshields.   Left to cherish fond memories are: two sons, Aydelotte “Binky” Deshields, Jr. (Sheryl) and Aydrian “Lil Link” Deshields (Olga); a devoted grandson whom he was instrumental in raising, Aydelotte “Tre” Deshields III, as well as eleven other grandchildren and seven great-grandchildren; a special nephew, Edward Deshields, Jr. along with a special niece and nephew, who acted as caregivers, Sylvester “Dawk” Bratten and Desi Bratten; three brothers-in-law, Ernest, Ronald and Anthony Harmon, and a host of nieces, nephews, relatives and friends.   Lovingly Submitted ~ The Family

The family of Aydelotte Alfred Deshields Sr. created this Life Tributes page to make it easy to share your memories.


Aydelotte Alfred Deshields, Sr. was born to the late...

Send flowers to the Deshields family.