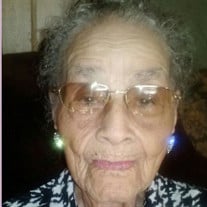 Audrey’s Life and Legacy In the quiet morning hours of Tuesday, March 1, 2022, my mother and our grandmother, rested in our Lord and Savior’s arms and peacefully went to Heaven at the age of 104. Audrey Marie Griffin was born on March 17, 1917 to the late Melissa Herald Northan-Church and Edward in Onancock, Virginia, she was raised in Parksley, Virginia. In adulthood, Audrey moved to Philadelphia, Pennsylvania and worked for NY Waterworks. She lived there for many years before returning to Virginia. She eventually moved to Snow Hill, Maryland and became the proprietor of the Snow Hill Fish Market, along with the Side Store and Gas Station. She also worked at Peninsula Regional Pediatrics in Salisbury, Maryland as a nursing attendant. Additionally, Audrey worked for Bell Telephone Company as a housekeeper and for Snow Hill Buddie Boys poultry plant. Audrey became a member of Ebenezer United Methodist Church and later joined the Mount Wesley United Methodist Church. However, in her later years, she joined Collins Temple AME in Snow Hill, Maryland with her beloved grandson Durand and granddaughter in-law Abra, who were devoted to her comfort and welfare. Audrey was also a member of the Eastern Star House of Ruth. She was an excellent seamstress, making and matching shoes and dresses. She loved to cook and her favorite was making dumplings and greens. She was an expert sausage maker and the yellow cake was out of this world. There was always a cake in the oven. Also her Toll House cookies were the best; oh yes and the sweet potato pies. No one ever left mom’s door step hungry because everybody ate. Audrey leaves to cherish loving memories: one daughter, Tavornia L. Amin of Snow Hill, Maryland; three grandchildren, Durand Bivens, Sr. (Abra) and Angelo Jackson-Jones (Terry), both of Snow Hill, Maryland and Malissa Jackson of Salisbury, Maryland; eleven great grandchildren, Samikka, Donyale, Antoia (Brent), Ebene’, Devanna, Charles Tony, Jasmine, Andreya, Henry III, Durand, Jr. (DJ) and Sade; thirteen great-great grandchildren and one great-great-great grandchild. In addition to her parents, she was preceded in death by her husband, William Lee Griffin (A.K.A Uncle Willie), her baby son, Lewis Bivens, Jr., brothers, Dewey, Vernon, Herman, Edgar and Hilton Parker and sisters, Shirley, Lola White and Dorothy Lucas. SUBMITTED WITH LOVE ~ THE FAMILY

Audrey&#8217;s Life and Legacy In the quiet morning hours of Tuesday, March 1, 2022, my mother and our grandmother, rested in our Lord and Savior&#8217;s arms and peacefully went to Heaven at the age of 104. Audrey Marie Griffin was born on... View Obituary & Service Information

The family of Audrey Marie Griffin created this Life Tributes page to make it easy to share your memories.

In the quiet morning hours of Tuesday,...

Send flowers to the Griffin family.