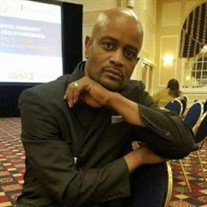 Antonio Lambert, affectionately known as “Bean-Bean,” was born to Frelesta M. Branch and the late Edward C. Lambert on January 3, 1970 in Portsmouth, VA. Antonio was raised and educated in Portsmouth, VA. He relocated to Delaware in 2011. Antonio worked for The INAPS (International Association for Peer Support) under the mentorship of the late Steve Harrington as an International trainer for Peer Support Specialist and was truly passionate about his work. He always made it a point to put his all into the speeches when he was beckoned to speak at engagements. Antonio had an amazing sense of humor…so much so that he could have been a professional stand-up comedian. He had sayings like, “That ain’t no forehead, that’s a 8-head wooooooo look at that thang” (he would add in that Bean-Bean whistle that only he could do), “Go head with your tall ear self”, and “You ain’t gone do nothin to Bud’s son”! He loved his family, friends, fishing & was an avid Las Vegas Raiders fan. He was preceded in death by his loving father whom he adored, Edward C. Lambert; brother, Maurice “Hendog” Hunt, and three beautiful grandchildren, twin granddaughters, Qu’Nae & Qu’Nasia Rodgers and Quintae Rodgers. Antonio leaves behind to cherish his memory, his loving wife June C. Lambert; his dear mother, Frelesta M. Lambert; stepmother, Freda Lambert; his loving mother-in-law whom he referred to as his Juliette, Marjorie B. Fields; his beautiful sister, Vonda Bazemore; ; his handsome brother, Duke Bazemore; his brother-in-law Edward W. Fields, Jr. (Anne); his beautiful daughters Lateshia Walton, Korbene’ Harris, Antionette Norwood, Kintiara & Shytiara Murry, Micah Viney & Da’Nia Lambert; his handsome son Rasheik Lambert; stepchildren, Jasmine Benson, Perriasia Thompson, Juniera Thompson, Perry Thompson & Prince Thompson; his adorable grandchildren, Q’Marri Rodgers, Da’Myah Thompson, Gary Norwood, III, Gabrielle Norwood, Dallas, LeGrand, Marcelus & Malachi Murry, Peyton & Perry Thompson, Jr. & Kayden Thompson. Also, a host of cousins, other relatives, & friends.

Antonio Lambert, affectionately known as &#8220;Bean-Bean,&#8221; was born to Frelesta M. Branch and the late Edward C. Lambert on January 3, 1970 in Portsmouth, VA. Antonio was raised and educated in Portsmouth, VA. He relocated to Delaware... View Obituary & Service Information

The family of Antonio Lambert created this Life Tributes page to make it easy to share your memories.

Send flowers to the Lambert family.