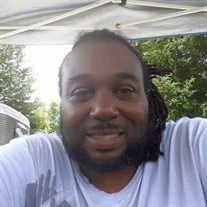 Anthony’s Journey... Anthony Jerome Wilson, Sr., at the age of fifty (50), departed this life on Tuesday, October 5, 2021. Born on January 21, 1971 in Florida, he was the son of Robert Richardson and Joanne Wilson Carnegie. Anthony received his education in Wicomico County public schools. After a brief illness in 2007, he decided to return to higher education and thus completed his Bachelor’s and Master’s degrees in Social Work from Salisbury University. Anthony, affectionately known as Tony, at the time of his death was employed by Wicomico County Department of Social Services in Salisbury, Maryland as an In-Home Services Case Worker. Prior to this, he worked many years as a truck driver for Sysco, Co., and Pepsi. In his spare time, he loved coordinating, spending time, and traveling with his AAU Basketball Team, DH2B. He also had a love for preparing and cooking dishes on Saturdays and becoming well-known in the area for his curry goat and curry chicken. Cherished memories of his life will be dearly remembered by: his mother, Joanne Carnegie; his wife, Latonya E. Wilson; his three children, T’Keyah S. Wilson of Greenwood, South C, Anthony (TJ) Wilson, Jr., and Antwan Wilson; a step-daughter, Janae M. Winder of Middle River, Maryland; two grandchildren, LaeLah and Omere; his brothers, Chris Carnegie and Robert Richardson, Jr.; his sister, Tameka Carnegie; several aunts, uncles, nieces, nephews, cousins, and many other relatives and friends. He was preceded in death by a brother, Vincent Carnegie

Anthony&#8217;s Journey... Anthony Jerome Wilson, Sr., at the age of fifty (50), departed this life on Tuesday, October 5, 2021. Born on January 21, 1971 in Florida, he was the son of Robert Richardson and Joanne Wilson Carnegie. Anthony... View Obituary & Service Information

The family of Anthony Jerome Wilson Sr. created this Life Tributes page to make it easy to share your memories.

Send flowers to the Wilson family.