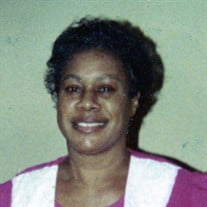 Annie Mae Stevenson Copes, beloved daughter of the late Ira Thomas Stevenson and Blanche Hayward Stevenson, was born on April 18, 1938 in Snow Hill, Maryland. On Saturday, August 21, 2021, she entered peacefully into eternal rest in the comfort of her home surrounded by her loving family. After the passing of her mother, she was reared by her sister, the late Rosa Olivia Milbourne, whom she looked up to as her mother. Annie Mae or Annie, as she was affectionately called, was educated in the Worcester County public school system. She worked for Candy Kitchen and Roses Stores for many years. However, none was more rewarding than working at Roses where she was employed for twenty (20) plus years before her health began to fail. She was a hard worker and did her job to the Glory of God. Her manager came to visit her and told her family “that if all the workers worked as hard as Annie, he would have a store full of Annies.” Annie Mae loved the Lord and singing praises to His name. She gave her life to Christ under the leadership of the late Reverend Clara Tull at Refuge Temple #2 in Stockton, Maryland. She was a member who served faithfully for many years before joining New Collins Temple A.M.E. Church in Snow Hill, Maryland. There she continued in the faith and remained active in serving the Lord as Worship Leader and head Communion Steward. She was particular about dressing the Altar and took special care when doing so. She was always willing to lend a helping hand whenever she could. May the work she’s done, speak for her. Annie Mae will always be remembered as being strong in the faith and a believer in the promises of God. She lived a godly life counted worthy to be called a child of God, in which her family and those who knew her best can attest. She was preceded in death by two brothers, Randolph Stevenson and Thomas Stevenson, Sr.; two sisters, Rosa Milbourne and Nettie Smith, her son, Garrett Stevenson, nephew, Brian Stevenson and niece, Victoria Stevenson. Annie Mae leaves cherished memories with: her husband, Thomas “Hun” Lee Copes; children, Robert (Janet) Stevenson of Salisbury, MD, Gail Thomas of Baltimore, MD, Lorenzo (Renita) Collick, Sr. of Berlin, MD and Terry Collick of Baltimore, MD; bonus siblings, Alice Stevenson of Snow Hill, MD and Sherwood Stevenson of Lawton, OK; a special sister-in-law, Kassie Robinson of Girdletree, MD; eleven grandchildren; nineteen great grandchildren; seven sisters-in-law; three brothers-in-law and a host of nieces, nephews, cousins and friends.  LOVINGLY SUBMITTED ~ THE FAMILY

The family of Annie Mae Copes created this Life Tributes page to make it easy to share your memories.

Send flowers to the Copes family.