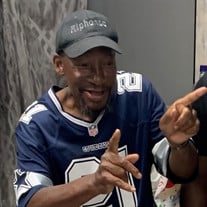 Alphonso Briscoe Miles, Jr., son of the late Alphonso Briscoe Miles, Sr. and Sylvia Jane Miles, was born on April 12, 1956, in Dover, Delaware. On Friday evening, March 25, 2022, at home and in the presence of his loving family, he left it all behind and gently departed his life on earth. He was 65 years young. Alphonso Jr. received his early childhood education in the Dover School District, and he graduated with the class of 1974 from Dover High School in Dover, Delaware. He also attended classes at Delaware State College (currently known as Delaware State University). His employment history primarily consisted of working at Playtex, Reichhold Chemical, and SunRoc, all of which were in Dover. Alphonso, lovingly known as “Fonzie” by close family and friends, had a beautiful personality, a big smile, and quick wit. He would bring the joy and fun to any room he walked into. He loved fishing, crabbing, and spending time with his family. Of course, he was a diehard fan of the NFL team, the Dallas Cowboys, and he was a motorcycle enthusiast, even becoming a member of the Thunderguards MC (Motorcycle Club). He was also a member of Delaware’s Finest Van Club. Although he did not attend church regularly in his latter years, Alphonso surely attended Whatcoat United Methodist Church in Dover, Delaware, since he was a child. In fact, he even shored up his salvation recently and acknowledged to his brother Lester, his acceptance of Jesus Christ as his Lord and Savior. In addition to his parents, Alphonso was preceded in death by two brothers, Charles Washington and Robert Henderson. Alphonso leaves to cherish his memory, his special friend/wife, Jeraldine Berry, Dover, DE; brother, Bishop Lester Jones (Brenda), Dover, DE; three sisters, Sheila Robinson and Eva Miles, both of Dover, DE; and Arlene Eason (Chris), Winston-Salem, NC; two daughters, Tanya Fruits (Aaron) and Nicole Miles-Berry, all of Dover, DE; one adopted son, Jeffrey Berry, Charlotte, NC; seven grandchildren, Zay’Niah, Aaron Jr., Zairryn, Zakir, Arian, Za’riah and Amaya; two aunts, Phyllis Kennedy, Dover, DE, and Simmie Mayo, Reading, PA; three special nephews, Demingo Miles (Tamika), Tyrone Miles, and Shawn Robinson, all of Dover, DE; two special nieces, Teena Robinson, Dover, DE and Tracy Henderson, Wilmington, DE; best friend and cousin, Robert Sullivan, his other big sister/cousin, Leslie Ingram; and a host of other nieces, nephews, cousins, and friends, far too numerous to list. Lovingly Submitted, The Family

The family of Alphonso Briscoe Miles Jr. created this Life Tributes page to make it easy to share your memories.

Send flowers to the Miles family.