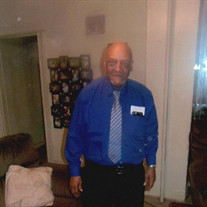 Albert Joseph Brown, Jr., was called home on October 19, 2021, at 12:41 a.m. He was 77 years old. He was born in the Bronx, New York. Albert was always addressed by family and friends as “Butch”. Albert married his high school sweetheart, Arline Patricia Simmons. They had eight children, seven boys and one girl. Albert enlisted in the United States Army. After receiving an honorable discharge, he returned to Brooklyn, New York to be near his family. He later moved his family to Jamaica, New York, where they resided for 31 years. Albert found employment with the New York City Housing Authority and retired in 2005, after 41 years of service. In 2005, Albert and Arline moved to Dover, Delaware, to be near his wife’s mother, who was experiencing health issues. Albert’s favorite sports team was the New York Knicks basket ball team. He enjoyed trying his luck at the casino, playing cards and enjoying his family. He was a man of few words but when he spoke, his words meant something. Albert was preceded in death by his parents, Albert Joseph Brown, Sr. and Edna Brown; and his oldest son, Albert Joseph Brown III (February 1993). Albert is survived by his wife, Arline Patricia Brown; seven sons, Raymond Brown, Wayne Brown, George Brown, Calvin Brown, Anthony Brown and Darryl Brown; one daughter, Antoinette Brown; sister, Barbara Collins and brother-in-law, Herman Collins; brother, Calvin Brown; 39 grandchildren; 14 great-grandchildren; two sisters-in-law; two brothers-in-law; and a host of family and friends. Albert lived a fantastic life. He never complained about anything. He was always smiling and joking with his family. Albert was always teaching life lessons. Dad, you may be gone, but never forgotten”.

The family of Albert J. Brown Jr. created this Life Tributes page to make it easy to share your memories.

Send flowers to the Brown family.