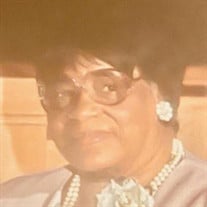 Ada Louise Wanamaker, age 93, the Queen of the family, was born July 23, 1928, to loving parents John Wesley Watson and Rebecca Robinson Watson. Ada grew up in Odessa, Delaware, and attended Louis L. Redding School in Middletown, DE. She passed away peacefully at home, on October 19, 2021, surrounded by family. Ada was united in matrimony to William Jerome Wanamaker on May 14, 1947. From that harmonious union three children were born, Doris Elaine Waters (deceased), Sandra Mae Sudler and Kathleen Lavessa Wanamaker. Ada, “Aunt Sis” and “Sis”, as she was affectionally called, lived her entire life in Odessa, Delaware. It was there she learned the love of God and worshipped Him at Friends of Zoar M. E. Church in Odessa, Delaware. She read the Word of God, her Bible, day and night. Ada was a devoted board member and Treasurer at the Friends of Zoar M. E. Church for over 50 years. She could be found raising money for the church on the weekends by selling her favorite sweet potato pies and various dinners to support the church along with faithful members Lucrecia Munson, and Louise Sadler, Pearl Minus, and Lola Henry who preceded her in death. She was pleased to be part of “Homecoming in Odessa” every July and always extended an invitation to family and friends to rejoice in the LORD. In addition, she loved to decorate the church for “Christmas in Odessa” and delightfully welcomed tourists to tour the historic church. Ada was a family woman who loved everyone. She was the matriarch and was committed to supporting her family. She instilled the value of family to anyone that she connected with. She was employed at St. Andrews School for many years. Ada was also a domestic worker for many families in the community. She had a giving heart and would invite anyone to live at her home when needed. It was her honor, pride and integrity that made her such a remarkable woman. Ada was a Godly woman who lived by grace through faith. She had an unfading measure of beauty with a gentle and kind spirit. Ada was a phenomenal mother, grandmother, great grandmother, and great-great grandmother. Her unwavering strength in the LORD was truly admirable. Ada was preceded in death by her loving husband, William Wanamaker; daughter, Sandra Mae Sudler; parents John and Rebecca Watson; seven brothers, Leland Watson, Enoch Watson (Lydia), Albert Watson, John Watson, Donald Watson (June), Ralph Watson and Nathaniel Watson (Kathrine); five sisters, Mert (Ted), Jeanette Turner (Wilbert), Alice Hall (John), Mayoma Williams (Johnny), Claretta Watson and Carolyn Turner (Luke); and in-laws, Mr. and Mrs. Edward Wanamaker. Ada leaves to cherish her memories, two daughters; Doris Waters and Kathleen Wanamaker; 10 grandchildren, Valerie Water-Kelluem, Douglas Waters (Rosaline), Gwendolyn Norwood, Constance Lively (James), Herman Sudler, Rochelle Sudler, Marica Sudler, Shevette Sudler, Nairobi Wanamaker and Shonna Gillis (late Donald); 18 great-grandchildren; 22 great-great grandchildren; sisters-in-law, June Watson, Katherine Watson, Betty Butcher, Elva Wanamaker and Erma Wanamaker; devoted friends, Maryeliza Wakefield and Lucrecia Munson; as well as a host of nieces, nephews, and cousins.

The family of Ada Louise Wanamaker created this Life Tributes page to make it easy to share your memories.

Ada Louise Wanamaker, age 93, the Queen of the family, was born...

Send flowers to the Wanamaker family.