To share your memory on the wall of Margaret Young West, sign in using one of the following options:

Print
Margaret Young West, was born to the late Rachael A. Young and Eugene Young, Sr., in Frederica, Delaware, on July 28, 1925. She departed to her heavenly home on November 18, 2020.

Margaret was educated at the Union Elementary School ... Read More
Margaret Young West, was born to the late Rachael A. Young and Eugene Young, Sr., in Frederica, Delaware, on July 28, 1925. She departed to her heavenly home on November 18, 2020.

Margaret was educated at the Union Elementary School until the sixth grade and later attended high school in Dover, Delaware, on the campus of Delaware State College. After high school, she worked at various jobs. She later retired from Perdue Poultry plant in Milford, Delaware.

Margaret was preceded in death by one daughter, Katrina West; five brothers and three sisters.

To send flowers to the family or plant a tree in memory of Margaret L. Young West, please visit our Heartfelt Sympathies Store.

Receive notifications about information and event scheduling for Margaret

We encourage you to share your most beloved memories of Margaret here, so that the family and other loved ones can always see it. You can upload cherished photographs, or share your favorite stories, and can even comment on those shared by others. 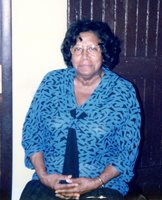